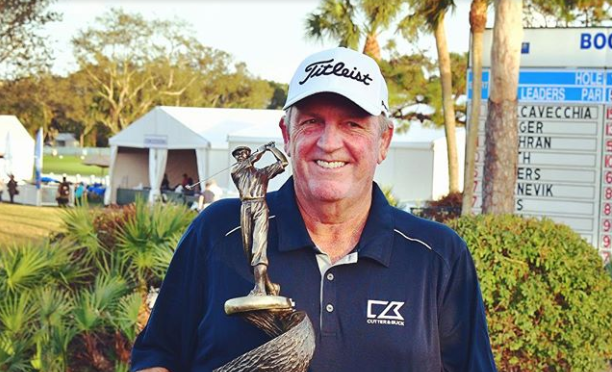 Mark Calcavecchia shot a final-round 2-under 70 to capture the Boca Raton Championship by two shots over Bernhard Langer who collapsed down the stretch. 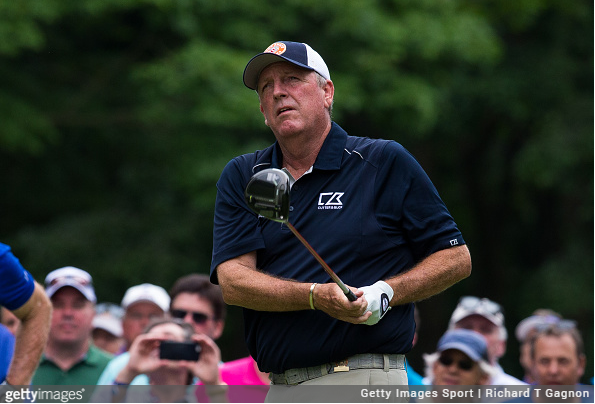 The 57-year old Floridian got off to a nice start on Sunday at The Old Course at Broken Sound, shooting a 4-under 32 on the out-nine to stretch his lead to four.

“I got off to a dream start, obviously, birdieing the first three holes, birdieing 7. But the hard part for me today was my speed on the greens was terrible,” said Calcavecchia.

Langer quickly gained two back, though, with birdies on 10 and 12.

After a pair of bogeys by Calcavecchia on Nos. 14 and 16, Langer had his first share of the lead at 16 under.

But the 60-year old German’s time at the top was brief, as a bogey-bogey finish handed the title to Calcavecchia, who closed with two pars to sign off on a 16-under 200.

“I hit a couple great shots and I left it short. It was a nice little downhill left-to-righter and I left the dang thing short. And then I hit a great drive on 18, I was proud of that,” said Calcavecchia, describing his final two holes.

“And then I hit first shot I hit all week left with a 6-iron. Just wasn’t easy. I never make things easy on myself. Why didn’t I just hit a nice high fade in the middle of the green and it was over.

Fred Funk posted a final-day 67 to grab third place at 13 under. David Toms also shot 67 to reach 12 under. Rounding out the top 5 was Russ Cochran who posted a low-round 65 to reach 11 under.

Making his Champions Tour debut, Golf Channel’s Charlie Rymer carded a 15-over 87 to post a dead-last place finish of 23-over par.

“Bernhard says he’s the heaviest he’s ever been because he’s stronger, muscle. He gives me the whole speech, you know, muscle weighs that other bullshit. I said, yeah, I know, I said, but I’m eating like a horse. I said, I get done with one of these workouts and I look like, you know, my dog.

Anything in the refrigerator I’ve got to eat. Then of course I’ve discovered ice cream. I never really ate ice cream my whole life except when I was a little kid. Now ice cream’s going down like a — So anyway, that’s why I haven’t really lost any weight. But I’m stronger.”
– Mark Calcavecchia

Calcavecchia Leads Langer By Two After 36 in Boca Raton