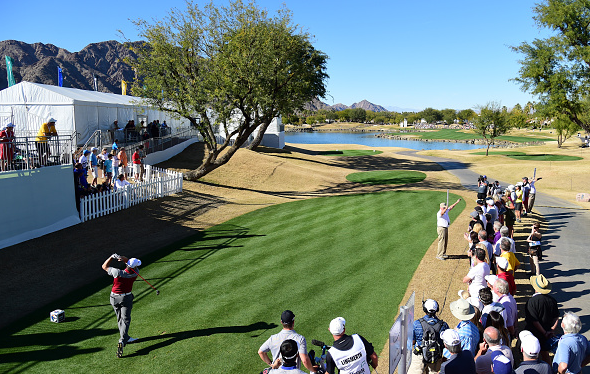 That loud sound you heard was the collective sigh of relief from the 156 PGA Tour professionals entered in this week’s CareerBuilder Challenge when they saw that Justin Thomas is taking the week off.

After his two-tournament Hawaiian swing sweep (winning by four and seven strokes, respectively), coupled with his recent victory at the CIMB in Malaysia, Thomas has risen from one of the best young players on Tour to a bonafide PGA Tour superstar.

As the Tour returns to the mainland U.S. this week, the large field is happy that someone else will have the chance to hoist a trophy.

Thomas may not be at PGA West in California, but many other great players will be teeing it up, including Phil Mickelson, Patrick Reed, Zach Johnson, and Paul Casey, among others.

In a long-standing tournament rich in tradition, the CareerBuilder Challenge provides yet another excellent opportunity for players to get their season moving in a positive direction.

To those who remember when there used to be an early-season five-round tournament, it was this one, back when it used to be called the Bob Hope Classic (best remembered for David Duval’s final round 59 in 1999, back when 59s were rare).

Now under new sponsorship, the tournament has been moved back to the typical four-round variety, but its compelling past has not been forgotten.

Imagine a course so difficult that PGA Tour professionals petitioned to have it removed from the tournament rotation. Seems unlikely?

Well, it happened in this event and at the course being played on this year – the TPC Stadium Course at PGA West.

The CareerBuilder Challenge began in 1960 as the Palm Springs Desert Golf Classic. The inaugural tournament was won by Arnold Palmer, who shot -20 in a 3-stroke triumph over Fred Hawkins. Palmer would go on to win the tournament a record five times.

Other past winners include Jack Nicklaus, Billy Casper, Johnny Miller, and Phil Mickelson. Bob Hope was added as the tournament sponsorship in 1965 (he became the tournament’s Chairman of the Board) and his famous name stayed in the event name through 2011.

Hope’s involvement was a big reason that the tournament became such a draw. It is well-known for its celebrity pro-am, which has showcased many famous celebrity golfers over the years, including Frank Sinatra, Bing Crosby, and Dwight Eisenhower.

This year’s tournament at PGA West is being played on the aforementioned TPC Stadium Course. This will be just the third year at PGA West, as it was so difficult in its 1987 debut that players petitioned to have it removed from the tournament rotation, which it was until it made its return just last year.

The defending champion of the CareerBuilder Challenge is Jason Dufner. The 2013 PGA Champion, Dufner, won on the second playoff hole over David Lingmerth, after Lingmerth hit a shot into the water.

The defining moment of the tournament came on the 17th hole in regulation when Dufner caught a huge break, hitting a shot off some jagged rocks that barely missed the water, allowing Dufner to save par. It was Dufner’s fourth career Tour victory.

Lowest Final Score: The Lowest Final Score at the CareerBuilder Challenge was 263, shot by Jason Dufner in 2016 and Brian Gay in 2013. For most of its history, the tournament has been five rounds, with the lowest total being Joe Durant’s 324 (-36) in 2001.

Undeniably, the most popular player in this week’s field is 2002 and 2004 CareerBuilder Challenge winner Phil Mickelson. The 5-time major champion is (probably; we’ll get to that in a minute) making his 2017 debut at PGA West.

Since the Ryder Cup, back in early October, Mickelson has played just once in the early 2016-17 Tour season, when he posted a T8 in Napa (CA) at the Safeway Open in early October. Three straight 69s followed by a final round 67 was an encouraging season start.

While Mickelson is committed to playing the CareerBuilder if he’s healthy, there is concern that he might not be able to tee off on Thursday, citing recovery from two recent hernia surgeries. Earlier this month, Mickelson referred to his chances as “50/50.”

If he does play, he’ll have the most eyes on him of anyone in the field – just as he does in most every tournament that doesn’t involve Tiger Woods.

Mickelson is coming off another successful season, although he still has not won on Tour since the 2013 Open Championship. He was in championship form at last year’s Open Championship at Royal Troon, putting together an all-time great major performance, where he barely lost in a duel with the one man in the field, Henrik Stenson, who was even in the same ballpark over those four days.

Even though it was yet another major runner-up, Mickelson’s performance showed that even at 46 years old, he still has some great golf left in him. He finished in the top-3 four times in 2015-16, including a T3 at last year’s CareerBuilder Challenge.

In his most recent big-time action, he played tremendous at the Ryder Cup, going 2-1-1 for the victorious American team, with his only loss coming in Sunday singles to Sergio Garcia – despite dropping 10 birdies. It was an unfortunate theme to his 2016 season: No matter how great he was, there always someone just a little greater.

In the two-year stretch from 2012-2013, Jason Dufner looked on the verge of becoming one of the PGA Tour’s premier stars. In mid-2012, he went on a ridiculous five-week stretch, famously right after getting married, where he won twice, finished runner-up in another tournament, and posted a T4 at the U.S. Open.

In 2013, he played well in all four majors, including a victory at the PGA Championship. Since then, however, he has been very average, contending little, and while he has not been terrible, he had clearly dropped off significantly from where he was at his peak.

That’s why it was so big for his career when he won last year’s CareerBuilder. The win did not come out of nowhere, but it felt like it was the first time we had heard his name in years, aside from his personal issues with his now ex-wife.

The victory led to a nice bounce-back season for Dufner, as he posted six top-10s and finished 19th in the final FedEx Cup standings.

Dufner turns 40 in March and hopes that he still has more victories ahead of him. His performance this week, at a place where he has recently won, could be telling of what we might see from Dufner in 2017. He is coming off a missed-cut at last week’s Sony Open, but a first round 65 had to be encouraging.

The CareerBuilder Challenge field contains a number of players who have had an exceptional struggle as of late, and one of the big things to look out for this week is if any of these guys can begin to make a move to get their careers back on track.

Here are a few of them:

The 33-year-old Aussie received a two-year Tour exemption for winning the 2015 AT&T Byron Nelson. He finished the 2015 season well, but since then, his career has been an absolute nightmare.

Bowditch is extremely personable and self-deprecating making him very easy to root for. Will this be the week he finally gets back on track?

Charlie Beljan has never been among the elites on Tour, but used to at least be a respectable player. He even won a tournament in 2012. Recently, however, it is difficult to find a regular player who has been worse.

Beljan entered 13 events in the 2015-16 season and made the cut in just one of them, a T74 at the season-opening Frys.com Open where he still missed the third round cut. The finish earned him exactly ONE (1) FedEx Cup point for the season.

Beljan has not played a fourth round since July of 2015. This will be his first tournament of the 2016-17 season.

Once one of the rising young stars on Tour, Mahan’s fall has been one of the most confusing developments in recent years. From 2007-2014, Mahan won six times, played on multiple Ryder Cup teams, and made it to the Tour Championship, the final round of the FedEx Cup playoffs, all eight years.

In 2016, Mahan had only one top-25 finish and missed 13 cuts in 22 events. He has only made one cut since last May: a 70th place finish at the Travelers Championship. He has missed the cut in all four events of the new season.

While he does not look close to turning his career back around, this is still a man who has had tremendous success in the past, and with this being his first tournament of 2017, it could be a good indicator of whether he is ready to be great again.

Reed, the biggest star of the Americans’ 2016 Ryder Cup victory, won the CareerBuilder Challenge in 2014. At #9 in the world, Reed is the highest ranked player in the field.

Reed is coming off another successful season in which he won the Barclays, and had 11 top-10 finishes, which ranked second only to Dustin Johnson. In his most recent outing, Reed finished T6 at the SBS Tournament of Champions, shooting a second-round 65 that tied the low round of the week.

Johnson, a two-time major winner, played well at last week’s Sony Open finishing T6 after a second-round 61. He did well enough in the first three rounds to be paired with winner Justin Thomas on Sunday.

Johnson has missed the cut at the last two CareerBuilder Challenges, but finished T3 in 2014.

Casey was one of the biggest (negative) surprises at last week’s Sony Open, missing the cut after opening with a 3-over 73 that beat only one player in the 144-man field.

Casey rebounded with a second-round 67, but it was not enough to get him into the weekend. Despite the Thursday hiccup, Casey has been in tremendous form since September with two runner-ups and a solo-fourth in the final three rounds of the FedEx Cup playoffs. In the new 2016-17 season, prior to the Sony, Casey has performed well, going T3 (Safeway), T21 (CIMB), T12 (WGC-HSBC).