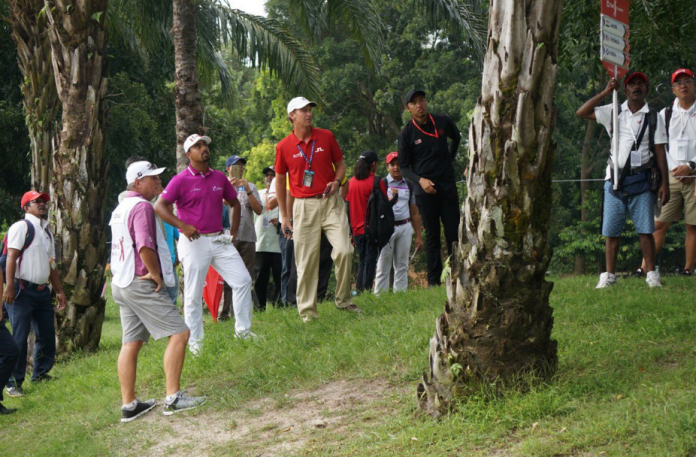 The CIMB Classic is officially in the books for 2016. Justin Thomas, the 23 year-old rising star from Kentucky, captured his second PGA Tour title with a final score of 23-under par.

For his win, Thomas walks away with 500 (very important) FedEx Cup points, and over $1 million in prize money. He also scores an invite to Kapalua in January for the Tournament of Champions event.

Here’s a roundup of the best and worst shots of the week at TPC Kuala Lumpur.

Shot of the Week

Kevin Na with his first ace on the Tour at the par-3 8th hole during the third round.

Worst Swing of the Week

One of our favorites, Spencer Levin, with a classic recovery during round two. Levin loses the club, and pretends it didn’t happen.

Jeunghun Wang with the best putt of the week on the par-4 14th hole during round one.

Is it safe to say this is the best-read putt of the young season? #ShotOfTheDay https://t.co/OeS4g58ubN

Most Interesting Putt of the Week

Keegan Bradley with the toilet bowl roll on a birdie on the 16th in the opening round.

Yep, Keegan's ball went all the way around the hole before dropping.

Make that seven birdies on the card. https://t.co/K6MDuKgDjz

Ryo Ishikawa with a birdie chip shot on the 16th hole during round three.

Worst Chip Shot of the Week

Marc Leishman attempts a chip shot birdie on the 14th hole and ends up with a lost ball and double bogey 6.

The Ballsiest Shot of the Week

With only 3 holes to play, and a 4 shot lead, Thomas fires at a dangerous pin placement. Not what you would call prevent defense.

Worst Break of the Week

Anirban Lahiri started the final round with a seemingly comfortable 4-stroke lead. But after his ball landed in a tree on the 3rd hole, resulting in a quadruple bogey, Lahiri quickly dropped to second place, two shots back (a 6 shot swing in 3 holes).

Ball stuck in a tree.
Quadruple-bogey 9.

On the 1st tee: Leader by 4
On the 4th tee: Behind by 2#GolfIsHard pic.twitter.com/7NY7NEQkD9

After a tough quadruple bogey on the 3rd hole, Lahiri shook it off and birdied the 4th, and followed it up with a sick eagle putt on the 5th hole.

Best Reaction of the Week

After realizing he was about to win the 2016 CIMB Classic and head to Kapalua, Justin Thomas is pretty excited.

When it's almost yours … ? pic.twitter.com/SseCvU3rXx