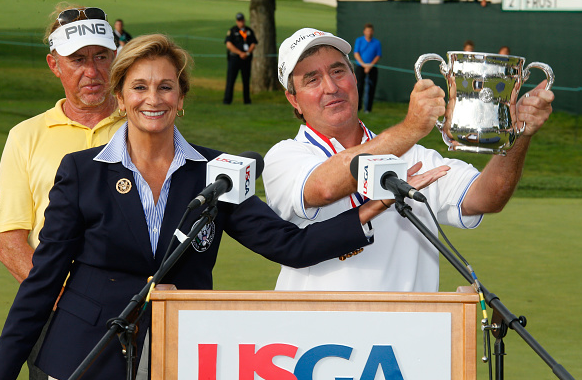 Heavy rain forced the U.S. Senior Open to play round four on Monday. Going into the final round, Miguel Angel Jimenez and Gene Sauers had separated themselves from the rest of the field.

Sauers closed with a 1-under 69, good for -3 for the tournament, and a one stroke victory for over Jimenez and Billy Mayfair.

It is an impressive accomplishment for the man who had to sit out seven(!) years after being diagnosed with Stevens-Johnson syndrome.

Five years after a near-death experience, Gene Sauers is on top of the golf world with his #USSeniorOpen victory.https://t.co/9Uul1Y2liN

For Jimenez that makes another tough finish, after he blew a 4-stroke lead in the final round of the Senior Open Championship.

Commercial of the Day

Alfonso Ribeiro has starred in a few commercials for the Champions Tour, promoting the upcoming Schwab Cup Playoffs. In this one, Ribeiro starred with Jay Haas and Billy Andrade.

While golf’s elites were withdrawing from the Olympics, South Africa’s Jaco Van Zyl did something unbelievable: he withdrew from BOTH the Open Championship and the PGA Championship to focus on Olympic golf.

Two days later, he does not seem to regret his decision. This message he posted to social media this morning raves about the Olympic experience:

Former LPGA player and current golf channel analyst Kay Cockerill was asked this morning why women have embraced the Olympic movement, while the men remained skeptical. Her answer is potentially controversial:

“By Nature, the women look big picture and have to fight very hard for everything, from the tournament schedule they work very well with sponsors to maintain relationships, they relish the big stage, and they don’t get the big stage very often, mostly the majors, the Solheim Cup, the international crown, and now this potentially, realistically the biggest stage they’re ever going to play on, and they know playing here they are going to reach potentially people in so many countries that have never even set eyes on golf, and hope to inspire players, both boys and girls to take up this game”.

It would be interesting to hear from some of the men’s players if they agree, or take issue, with Cockerill’s thoughts.

European Tour golfer Rikard Karlberg of Sweden, the #81 ranked golfer in the world, recently got an attractive new pair of golf shoes:

They are from the @Footjoy collection, a collection that boasts any style that can be thought of, from sporty models to more traditional ones, like Karlberg’s.

The European Ryder Cup Team (@RyderCupEurope) has been profiling players who have clinched a Ryder Cup spot. Today, they focus on Masters Champion Danny Willett:

The Ryder Cup rookie is the current Race to Dubai leader, although his play has dropped off considerably since that Masters triumph. He went T37, T53, T79 in the other three majors, and has not factored into a European event since a third place finish at the BMW PGA Championship in late May. Still, he has two victories on the season, and has shown that he can succeed in high pressure situations.

With the FedEx Cup playoffs starting next week, one guy who will not be worrying about his position (at least as of yet) is Justin Thomas. Thomas ranks ninth in the standings, and is in the midst of a season where he has five top-three finishes, most recently at The Travelers Championship.

Crazy to think I'm headed back to @wyndhamchamp today in which I played for the first time 7 years ago.. Time flies! Pumped to get back to a place I have great vibes at. Y'all think I'm small now.. How bout in 09? ????

Thomas posted this picture from seven years ago, when he played in his first Wyndham Championship.

Surprising Service of the Day

Apparently, Nick Faldo will gives swing critiques if you post a video.

Thought of the Day

Graham DeLaet, one of Canada’s Olympic representative, had this humorous thought regarding his week in Rio:

After spending a week in Rio, there are a number of things a guy realizes he takes for granted every day. Dependable plumbing tops the list.

DeChambeau: Above and Beyond

The beauty of pictures is that some things live on! pic.twitter.com/v5XoNj1G6g