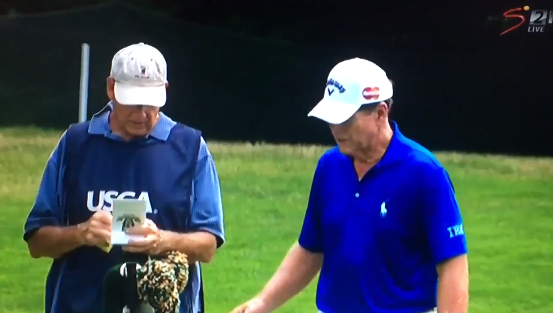 This exchange between Tom Watson and his caddie during round 1 of the US Senior Open is cringeworthy.

Before his 2nd shot to the par 4 3rd hole at Scioto Country Club, Tom Watson asked his caddie a simple question: “What’s it to the front edge?”

His caddie tried to give him the yardage but couldn’t seem to do simple math and was corrected multiple times by Watson who had reached a boiling point.

How awkward is this exchange between Tom Watson and his caddie during round 1 of the US Senior Open… pic.twitter.com/gfEXcBAB1f

Watch the full awkward exchange (although will likely be removed by USGA):

Leave it to Fox to give us a whole 90-seconds of this uncomfortable moment. Hat tip to Joe Buck for the “…hasn’t not been heard from since” line.

Watson would go on to shoot a 71 in the first round of the US Senior Open but finished T54 at +15 when it was all said and done.