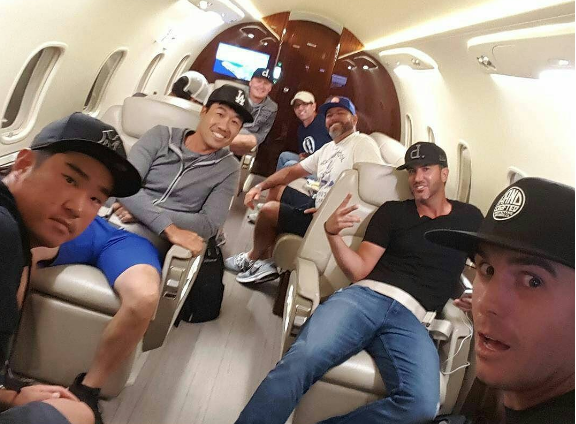 In today’s PGW Daily, Justin Thomas and Rickie Fowler let fans determine their playoff facial hair, the rich get richer in a long-drive competition, Si Woo Kim’s amazing ability to hole out, a star-studded charter plane to the Barclays, and a look at the European Ryder Cup team.

Selfie of the Day

Lexi Thompson stuck around Rio for the closing ceremonies.

Even though it was raining and cold it was still so amazing to walk in closing ceremonies with all the different countries!! best experience of my life ?? #badhairdontcare #experienceofalifetime

? see ya in NY! #Repost @kevinna915 with @repostapp ・・・ We are going to the Playoffs! off to Barclay's with @scottpiercypga @billyho_golf @kharms27 @micahfugitt @johnhuh21 #netjets #PGATOUR #FedExCup #playoffs #barclays

Wyndham champion Si Woo Kim has struggled on approach shots this year, ranking 132nd in strokes gained: approach the green and 117th in greens in regulation. Yet, he leads the PGA Tour with 20 hole-outs. For context, Adam Scott has 8, Rickie Fowler has 7, Justin Rose has 4, and Bubba Watson has 3.

Not all of those 20 were holed from long-distance, but he has done that more than anyone this year. He has actually been pretty good around the greens, ranking 14th in shots gained: around-the-green.

There is still some positioning to go on the American side, but this weekend’s provided a last chance to finish in the top nine and qualify for Team Europe.

McIlroy, Willett, Stenson and Wood qualified via the European Points list, while the rest qualified from the World Points List. This will be the first Ryder Cup for Willett, Wood, Cabrera-Bello, Sullivan, and Fitzpatrick.

There are still three spots up for grabs, which will be decided by European Captain Darren Clarke. Here are a few of the notables he has to choose from, with their current ranks in the European Points list and the World Points List.

Picking just three from that group will be an arduous task.

Prize of the Day

Dubai commonly has the more picturesque backdrops in golf, but this one is still stunning.

Not a lot beats this view over Dubai Marina during a round of Night Golf ? #my dubai pic.twitter.com/OU9zG7m1Cw

Celebration of the Day

It wasn't a dream.

Fan favorites Justin Thomas and Rickie Fowler are going to twitter to settle a decision on whether they should grow playoff mustaches.

So @RickieFowler and I are thinking of starting a little #playoffmustache.. What you guys think?? ??

A Stat That Should Suprise No One

Henrik Stenson has been the straightest hitter on the European Tour this season.

Scott Brown aced the same hole in the same round of the same tournament that he aced last year.

Titleist, one of the most reputable names in golf, believes their “Velocity” ball will make you longer off the tees, while sacrificing nothing in the short game.

Looking for explosive distance and playable feel in the short game? Explore the Velocity: https://t.co/t72Xmrb25c pic.twitter.com/tTwhqVtO7A