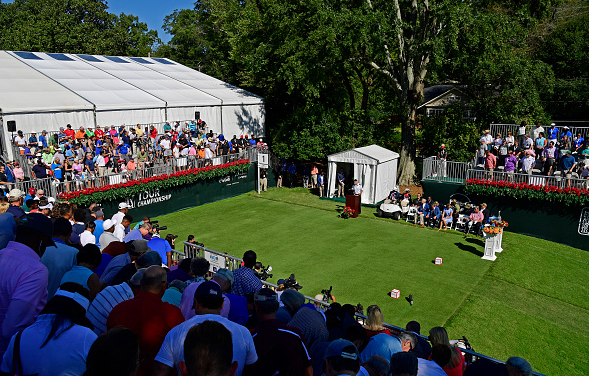 Today is Thursday, and more importantly to the PGA Tour, it is the opening round of the Tour Championship. The thirty players who performed best in the FedEx Cup this season will battle for the FedEx Cup and $10 million.

In today’s PGW Daily, we look at what is going on in East Lake. We also chronicle Rafa Cabrera-Bello’s frustrating experience with British Airways, and show you a celebration that occurred too early.

As a sponsor of the Tour Championship, the playoff finale, Coca-Cola put together a welcome packet with a number of their products. This particular one was from William McGirt.

McGirt is having a career year, but he will need a career tournament to win the FedEx Cup from the 23 slot. As Bill Haas showed in 2011 though, it is possible. Haas was able to claim the $10 million prize despite starting the Tour Championship from #25.

McGirt was the winner of the Memorial Tournament and finished T10 in the PGA Championship.

A common theme on every professional tour this season has been problems at airports. Most of the time, it involves clubs not getting where they are supposed to, but sometimes, like this one involving the European Tour’s Rafa Cabrera-Bello, it is airplane staff issues.

2/2 One crew not enough for aprox 15 passengers in business?But 2 enough for more than 50 in economy? @British_Airways Who taught you math?

I hardly ever criticize,but been downgraded on my flight because @British_Airways screwed up with their number of crew members @WestwoodLee

Rafa is confused about the policies of British Airways. It got even worse when they gave him a “window seat” in a row without a window.

This journey gets even better I asked @British_Airways to at least give me a window seat. Seems that they forgot to put a window there! pic.twitter.com/33cEUSshxL

Hopefully, flights go fine when he heads to Minnesota soon for the Ryder Cup. Cabrera-Bello is having his best season in 2016, with zero missed cuts and five finishes of T5 or better. His most impressive tournament this year might be his solo-third at the Dell Match Play, where he absolutely annihilated Rory McIlroy in the consolation match. He is currently 4th in the Race to Dubai Standings.

Ready for the Ryder Cup

European Ryder Cup member Chris Wood got special stamps on his clubs for the much anticipated tournament.

Wood won the BMW PGA Championship in late May, the Euro Tour’s flagship event. He has no top 10s since that win, however. Wood first got on the international map when he finished in the top five of The Open Championship in back to back years (2008-09) as an amateur.

Speaking of the European Tour, Bernd Wiesberger took a picture showing the heavy fog that is causing issues at the Porsche European Open, this week’s event.

Wiesberger, a Dane, took second place in last week’s KLM Open. He also had three other top-11 finishes in his past seven events. Wiesberger played in the final pairing on Sunday of the 2014 PGA Championship, but a 74 dropped him to a tie for 15th, seven strokes behind champion Rory McIlroy.

Awwwww Picture of the Day

American LPGA golfer Brittany Lang had a nice picture idea, with a baby standing in the U.S. Open Cup. Lang won the Women’s U.S. Open, easily her best result in a season where she has earned $1.1 million, good for seventh on the LPGA. She is currently the #21 ranked women’s golfer in the world.

The Tour Championship is going all-out to make the FedEx Cup finale a memorable one. They made pancakes shaped into the likeness of each top 30 player.

Good morning from the #TOURChampionship! How would you like your pancakes cooked? ? pic.twitter.com/ChJPEkq1FA

Dustin Johnson is currently the favorite to take the FedEx Cup, as he is leading after his victory at last week’s BMW Open. Johnson, Patrick Reed (2), Adam Scott (3), Jason Day (4), and Paul Casey (5) automatically win the FedEx Cup if they win the Tour Championship, but the entire field has a mathematical chance of finishing #1.

Sweden’s Rikard Karlberg was robbed of a putt he thought he holed at the Porsche European Open.

When you know it's going in…and then it doesn't. ?#EOGolf pic.twitter.com/4xF6kQdGUw

Karlberg, ranked #82 in the world, struggled in his first round with a three-over 74. His best finish on the season is a solo-second at the BMW PGA Championship, won by Chris Wood.

The LPGA’s Michelle Wie got some cardio and strength training in by running up the long stairs at San Francisco’s City Jungle Gym.

Wie has struggled badly this season, with ten missed cuts in her last 15 events, and no finish on the season higher than T25. She is still one of the longer drivers on tour (30th), but is having problems with accuacy (155th). Wie has four career victories, but none since her breakthrough major victory at the 2014 U.S. Women’s Open.