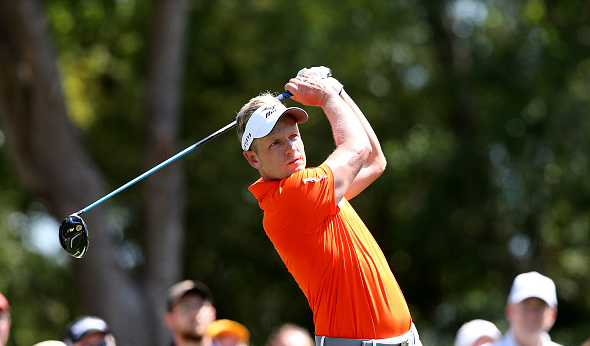 After two rounds of the RBC Heritage at Harbour Town Links on Hilton Head Island, a plethora of compelling stories have formed at the top of the leaderboard.

Two are tied for the lead at 10-under-par: 35-year-old Canadian Graham DeLaet, who is still looking for his first career PGA Tour victory, and Luke Donald, the 39-year-old Englishman who has had close call after close call in this tournament (six top 3s in the last eight years) without a victory.

The intriguing pair holds a two-stroke lead over two other big names, Ian Poulter and Webb Simpson, former greats who are hoping to regain old form.

This tournament is especially important for Poulter, who is playing on a 10 event major medical extension and needs to earn $220,301 during this stretch to keep his card.

Going into the RBC, he’d used up eight of those exemptions, and was still $145,000 short. According to projections, Poulter will need a 12th place finish or better to hit the magic number, and regain full Tour status.

DeLaet and Donald had matching rounds of four-under 67 that shared some similarities. They both had just one bogey on the day, but rebounded quickly from it. DeLaet was +1 through seven holes, but went on a mid-round tear, going birdie, eagle, par, birdie, birdie on 8-12. He then parred out the rest of his round.

Donald started his round with three straight pars followed by three straight birdies. He had trouble off the tees on the back nine, but his brilliant short game was able to negate most of that damage. A birdie on 18 capped off the -4 round.

Other Great Round 2s

The round of the day came from Kevin Kisner, who needed to do something positive after shooting a one-over 72 in round 1. Kisner shot 8 strokes better on Friday, posting a bogey-free seven-under 64 to rocket 81 spots up the leaderboard. He was incredible tee-to-green, gaining nearly five strokes on the field in strokes gained: tee-to-green.

Keegan Bradley had a similarly great bounce-back. After a dismal round one 75, Bradley carded 8 birdies in a five-under 66 that allowed him to make the cut on the number.

Graham DeLaet has received most of the attention among the Canadians at the tournament sponsored by a Canadian company, but Nick Taylor has also played himself into contention. Taylor’s six birdies to one bogey lead to a five-under 66, which vaulted him into a tie for fifth place, just three strokes behind the leaders.

Russell Henley, the winner of the Shell Houston Open two weeks ago, who was also T11 at The Masters, finally cooled off his recent hot streak. He was well in contention after a round-one 66, but round two was a much different story.

Henley was -2 through five, and then +4 for the rest of his round, posting a two over 73. He dropped 27 spots down the leaderboard.

Ben Crane had birdies on his first two holes, and then none over his last 16. With five bogeys in a six-hole stretch from 7-11, Crane shot a three-over 74, and is now eight strokes out of the lead.

“We got a little bit fortunate because we played the front nine in relatively no wind, and as we played the back nine and it kept picking up and picking up. I don’t know what the forecast is, if it’s supposed to continue, but I got a good draw being first off today; at the same time, I played some nice golf, and I hang near the top as the weekend starts.”
–Graham DeLaet, round two co-leader