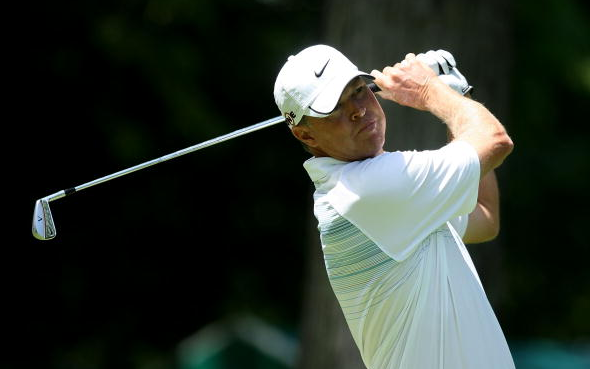 Bob Tway fired an opening round 7-under 65 at TPC Sugarloaf and leads the Mitsubishi Electric Classic by a stroke over David Frost, who is alone in second at -6.

Tway, the 1986 PGA Champion, did most his scoring over the first nine holes, where he carded a bogey-free 6-under 30, highlighted by a hole-out eagle. Tway’s impressive play continued on the back side with birdies on holes 10, 12, and 15. But two late bogeys, on 16 and 18, dropped the 57-year-old back to 7-under.

The South African Frost, also 57, had the more steady round, shooting a bogey-free 6-under-par 66 with 6 birdies and 12 pars.

A group of six players are tied for third at 4-under, including Larry Mize and Bernhard Langer. Overall there are 36 players within five shots of the leader Tway.

Here's how it all went down Friday in Rd. 1 of the @MEClassicGolf. pic.twitter.com/Zyaqb9VB1J

Any highlight from legendary Tom Watson has to be the pick of the day.

Bob Tway meets with the media following his impressive 7-under 65 in Round 1 of the @mitsubishielectricclassic.

“It’s just a wonderful golf course. The par 5s are reachable, and here it’s kind of cool because they’re kind of risk-reward par 5s. You can make birdies and eagle, but you can also make the other stuff. I think that’s the way the golf course is meant to be played. Holes like No. 7, it just reminds me of Augusta (National Golf Club), the green sitting up top, and right and left is no good. There’s a lot of really neat shots at a place like this.”
–Bob Tway, first round leader, speaking about TPC Sugarloaf

Mitsubishi Electric Classic, Round One, April 14, 2017