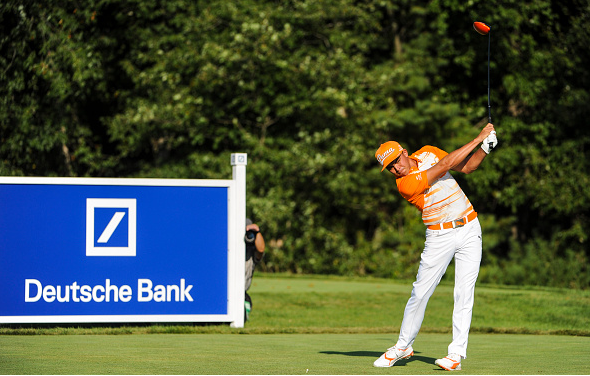 After a four year absence, the PGA Tour made a grand return to the Boston area in 2003, with Adam Scott winning the inaugural Deutsche Bank Championship.

One of the youngest event on the PGA Tour, the Deutsche Bank Championship is the home for the second leg of the FedEx Cup Playoffs. Past winners here include Vijay Singh, Phil Mickelson, Tiger Woods, Rory McIlroy, Henrik Stenson, and Rickie Fowler.

Here are 6 interesting things to know about the Deutsche Bank Championship.

Since 2003, the Deutsche Bank Championship has been part of the Labor Day Weekend holiday, and unlike the other PGA tour stops, offers a Monday finish to the event.

The Tiger Woods Foundation has been the primary beneficiary of most of the charitable proceedings at the Deutsche Bank Championship. This early partnership with Woods allowed the Boston event to quickly become established as marquee event on the PGA Tour, prior to it becoming a playoff event.

Since this is a fairly young event, there have been plenty of players who’ve made the cut at TPC Boston in every single one of their appearances.

Originally an Arnold Palmer design, the PGA Tour felt the course needed a deep makeover once it was final that the Deutsche Bank Championship would be a part of the FedEx Cup Playoffs.

Gil Hanse and Brad Faxon made the venue befitting of holding a Playoff event. The original design was more of a bomber’s paradise, but the alterations have given the shorter hitters as much of a chance.

The 18th at TPC Boston is one of the best finishing holes on Tour. A classic risk-reward reachable Par-5, the redesigned green has faced some controversy though.

In 2012, Luke Donald ranted out on Twitter after finding the green in two and subsequently four putting. Jason Day once decided not to comment because he only wanted to say “nice things”.

It’s been 13 years since the first edition was held in 2003, and Hunter Mahan is the only players to tee-up all 13 times.