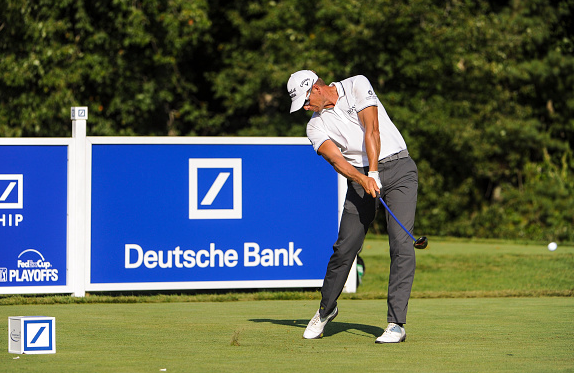 According to a report at FoxSports.com, the Deutsche Bank Championship may be in its final year as a PGA Tour event.

1. Deutsche Bank is in its in final year as title sponsor, and has not renewed.

Deutsche Bank’s contract as title sponsor ends this year, and Bill Woodley, chief executive officer of Deutsche Bank Americas, wouldn’t say recently if the German banking giant, which has had problems, will renew.

“We haven’t made a decision about that at this point,” Woodley told reporters. “The Tour is looking forward to giving some news on tournament week.”

2. The Tiger Woods Foundation is leaving as the host/manager/charity of the Boston event, taking on same role with the new Genesis tournament at Riviera in 2017.

One thing that will change is that the Tiger Woods Foundation is leaving as the tournament’s management team and primary charity, taking over the same duties at what is now the Genesis Open, the PGA Tour’s Los Angeles-area event at Riviera Country Club.

3. PGA Tour players have complained that the season is too long, and that the playoffs should be shortened.

The players have taken to the concept of the playoffs, which are in their 10th year, but almost everybody agrees that the golf season is too long — and things were complicated this year by golf’s return to the Olympic Games.

PGA Tour commissioner Tim Finchem acknowledged earlier this year that the players find the four-pronged playoff can be arduous, saying that other options are being considered.

While the first two reasons are in fact true. The third doesn’t sound plausible. The playoffs offer some of the biggest paydays of the season, with huge purses and smaller fields.

As of now, the Deutsche Bank Championship is listed as a FedEx Cup playoff event for the 2017 PGA Tour season, in its regular Labor Day weekend slot.