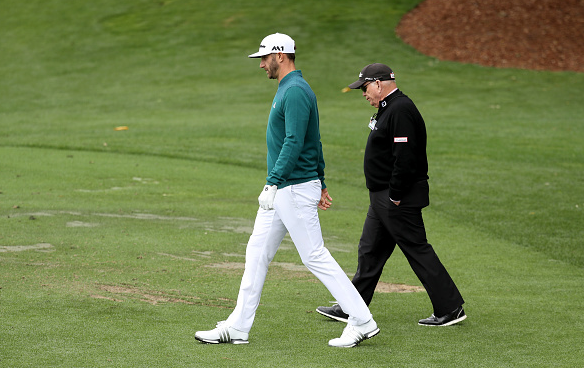 Dustin Johnson showed up at Augusta National on Thursday morning and attempted to make a go of it, despite suffering a serious back injury the previous day. The world No. 1 practiced for about an hour on the range, under the watchful eye of Butch Harmon and his caddie brother Austin.

It appeared DJ was in pain during his practice swings, but decided to “give it a shot,” seemingly at the last minute. While on the first tee, however, the world No. 1 walked off, and officially withdrew from the 81st Masters.

In a press scrum afterwards, DJ said that it “sucks really bad” that he had to WD, but said he simply couldn’t make a “normal swing.” Johnson said the injury appears to be a bad bruise, and that he’ll “probably be playing golf by the weekend,” which makes it more disappointing, as he was hoping to gut it out for a day or two.

The Masters Tournament released the official news on Twitter.

.@DJohnsonPGA has notified the Masters Tournament that he will not participate in the 2017 Masters due to injury. #themasters