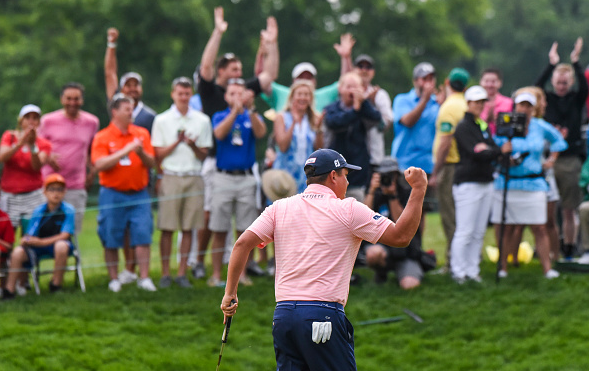 The talk going into this week’s Memorial Tournament (the talk about things that happen on the course anyway) was mostly about DJ (Dustin Johnson), the world #1 who is in the midst of his best season yet.

Now, with the tournament over, it looks like the talk should have been about JD.

Dufner, who held a five-shot lead through 36 holes, after back-to-back 65s, had a nightmare third round (5-over 77), but was in control most of Sunday, riding seven birdies to a 4-under 68.

Leading by two over Rickie Fowler, through 17 holes, Dufner hit his tee shot on the 18th well into the rough before the horn sounded, indicating the day’s second weather delay.

Starting back up just after 8 PM local time, Dufner hit out safely, and then two shots later nailed a 32-foot par putt to put The Memorial out of reach.

Finishing at 13-under, Dufner snatched his fifth career victory, this one by three strokes over Fowler and India’s Anirban Lahiri.

How Dufner Did It

The first two rounds of this tournament were Jason Dufner, and then everyone else. Sitting at -14 and five shots clear of the field, Dufner looked like he might cruise to victory. Then Saturday happened. Six bogeys and a double later, Dufner was suddenly four shots out of the lead going into Sunday.

Dufner was somehow able to put that third round 77 out of his mind, and got back into the lead mix early with a birdie on No. 2, but then hit a patch where he combined three bogeys and two birdies to reach the turn in even-par.

His back nine was brilliant. Despite the tournament being halted twice for weather delays, Dufner never looked out of sorts, playing that back nine in a bogey-free 4-under, which left him at 13-under for the week, and a three-shot victory.

Tee-to-green, Dufner gained 5.6 strokes on the field in the final round, largely due to incredible iron play.

What It Means For Dufner

Dufner’s fifth career victory, and first since the January 2016 CareerBuilder Challenge, was a small surprise since his history at Muirfield Village had been nothing special, but it wasn’t a complete surprise as the 40-year-old had finished in the top 15 in three of his previous five starts.

Dufner was seemingly at the peak of his career in August of 2013, when he won the PGA Championship and reached No. 8 in the world, but aside from the win at the 2016 Careerbuilder, his past three years had been mostly a struggle, and by the end of 2015, he had fallen to No. 135 in the world.

If he was ever gone, it looks like he may be “back” now. The remarkable way he won should give him considerable confidence going into the U.S. Open. Only one player in history, Kenny Knox at the 1986 Honda Classic, has won a non-major with a worse third round than Dufner’s 77.

Anirban Lahiri has flashed plenty of talent, but overall was having a miserable 2017 season. He had no answers on the greens, as he came into the week ranked an atrocious 198th in Strokes-Gained: Putting, and was best known for his cringeworthy 18th hole meltdown on Friday at THE PLAYERS Championship when he knocked his first three shots into the water (none were even close to land), finishing with a 10 on the par-4 to go from E to +6 and miss the cut.

That being said, Lahiri was undoubtedly the best player at Muirfield Village on Sunday, shooting a bogey-free 7-under 65 to rocket from T27 to T2. Lahiri led the field in birdies for a week, in addition to Strokes-Gained: Putting, which should help that 198th ranking tremendously.

The 29-year-old from India gained over nine strokes on the field in putting alone, with 7.3, an unfathomably great number, coming in a round 2 70.

Matching Dufner’s 68, the second lowest Sunday round, was Kyle Stanley, who added a T6 to an impressive comeback season.

Stanley’s round included seven birdies and an eagle, and after having just one top-10 finish in his three previous seasons combined, he now has four in 17 events this year. The third and final Sunday 68 came from Canada’s Graham DeLaet, who jumped from T27 to T10.

In respect to where they were on the leaderboard, nobody had a worse Sunday round than the six-over 78 posted by Daniel Summerhays.

Leading by three strokes going into the final round, Summerhays was attempting to become the fourth consecutive Memorial winner without a previous victory on the PGA Tour. He was especially miserable on the back nine, coming in at +5 to drop into a tie for 10th.

It was a tough final day, but the experience in front should be valuable for the 33-year-old from Utah.

Steve Stricker, the 2011 Memorial Champion, originally was not in the field for this event, but added it in an attempt to qualify for the U.S. Open in his native Wisconsin.

At T14, Stricker was in great position through three rounds, but his final round probably made him wish he had stayed home. He played his front nine at +5, and then added three more bogeys on the back for a 6-over 78, which dropped him to T40, which does not help his chances of getting into the top 60 (he was #85 to start the week) before the June 12th deadline.

A Dud From the Defending Champ

In his 2016 Memorial title, William McGirt played his last 22 holes bogey-free, and came out on top in a playoff over Jon Curran.

In his final 22 holes holes this year, McGirt had six bogeys, two double-bogeys, and one quintuple-bogey.

With an 11-over 83 on Sunday, McGirt plummeted 40 spots down the leaderboard, finishing in a tie for 67th.

“Obviously, yesterday wasn’t my best day. I was pretty disappointed, especially with how well I played the first two days; I thought I was in good control, but I had to get over it quick. It’s a 72-hole golf tournament, there are a lot of things that can happen out there, and I knew I was in the mix; I just had to get myself together. Making the turn at even was good, and I felt comfortable to get a little aggressive on the back.”
–Jason Dufner, 2017 Memorial Tournament Champion