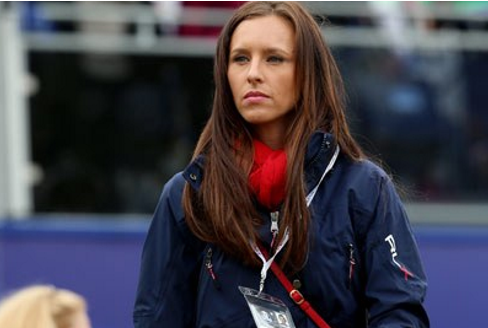 The Ryder Cup has been over for four days now. But the smearing the Hazeltine golf fans by the politically correct media has not stopped.

Note: They seem to run the same narrative whenever the Ryder Cup is played in the United States.

Dave Shedloski, a well respected writer for Golf World and Golf Digest, is one of the many in the golf media world who won’t give up on criticizing the Hazeltine fans.

It was shameful. And the language… oy. https://t.co/A2e1qtlwcz

Well, Jimmy Walker’s wife Erin seems to have had enough of it. The PGA Champ’s wife fought back against Shedloski’s criticism on Twitter.

Walker noted that golf fans are sports fans (who like football and golf) and that it was no different in Boston.

@BobEstesPGA it was not that bad!! It was the same as a football game. Golf American style. Hear same stuff in Boston.

Shedloski fought back by bringing up “language” and the “coarseness to our culture” – which is one of the most commonly used terms in the media to police words, actions, and culture they deem politically incorrect (see safe spaces, trigger warnings).

It was more the language out there. Little kids around, and f-bombs flying. Coarseness to our culture.

Walker was buying none of Shedloski’s call for PGA Tour events to become safe spaces.

exactly. Don't bring young children to events like that. If do, explain it's adult language.

And she wrapped it up by saying it’s not her job to be a PC police officer.

there were 50,000 people out there. What am I supposed to say? I can't police every persons language. Not my job that week.

Watch Patrick Reed Use a Drone Flying Around as Target Practice