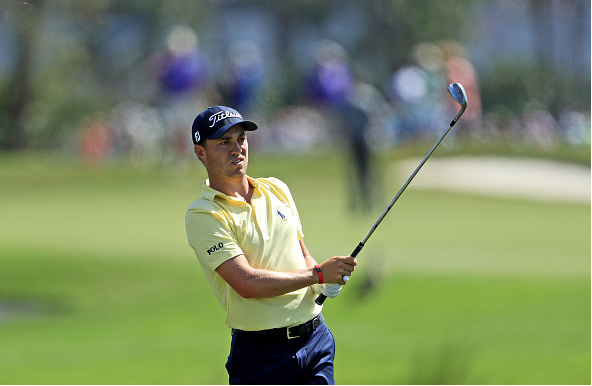 Justin Thomas shot a final-day 68, and then beat Luke List on the first sudden-death playoff hole to capture the Honda Classic title.

But before that, the 24-year old star was all the buzz on Twitter for wanting a fan kicked out for yelling, “get in the bunker”… after Thomas had struck his Titleist Pro V1.

Some liked the move…

Idiot fan: “Get in the bunker.”@JustinThomas34: “Who said that? Are you kidding? You just said for that ball to get in the bunker. Was that you? Enjoy your day, buddy. You’re gone.”

A drunk jerk in the gallery was being a drunk jerk, @JustinThomas34 has the jerk removed, and now JT is a jerk for having the jerk removed. I just want to make sure I'm understanding society's new acceptance of petulance and why manners aren't popular anymore. #imwithJT

Justin Thomas asking the crowd which one of them was cheering for his tee ball to find the bunker after smashing down the middle of the fairway: "Enjoy your day, buddy." #legend

@JustinThomas34 is a butter-soft, prima donna, millennial brat. That patron didn’t deserve to get booted

So someone just yelled for Justin Thomas' ball to get in the bunker and he had him kicked out. Kind of a bitch move tbh.

#justinthomas needs some maturing. Wants another patron removed for wishing his ball into the bunker, after his swing.

Wow did @JustinThomas34 have someone thrown out for yelling “Get In The Bunker” after his tee shot? What a snowflake. #HondaClassic

Clean up in aisle PR…

After 90 minutes of media interviews and the trophy presentation, @TheHondaClassic winner @JustinThomas34 still makes time for his fans. @PGATOUR pic.twitter.com/y7mvCP6a0Y