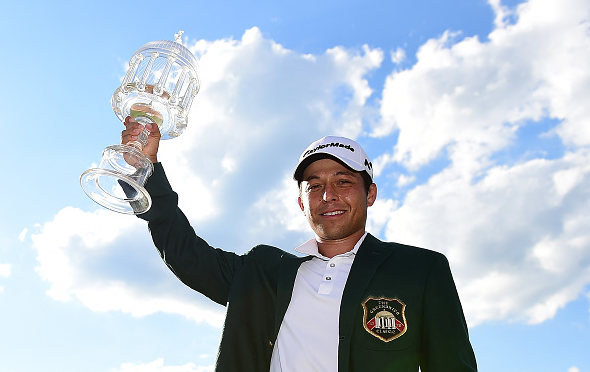 Rookie Xander Schauffele posted a 3-under-par 67 on Sunday to capture his first career PGA Tour victory at the Greenbrier Classic.

Schauffele, who introduced himself to golf fans at Erin Hills with a top 5 finish, made a 3-foot birdie putt on the 18th at Old White TPC to finish at 14-under and edge Robert Streb (69) by one stroke.

“The U.S. Open was a huge moment in my career,” Schauffele said. “It was one of the biggest stages, and for me to be calm and collected throughout the week and just kind of hang on and tie for fifth was huge for me mentally. It kind of gave me the confidence and allowed me to play to win this week.”

Sebastian Munoz, who was the leader after each of the first three rounds, struggled to a 2-over 72 and had to settle for a T3 finish alongside Jamie Lovemark (69) at 12-under.

Davis Love III, who started the day with hopes of becoming the oldest PGA Tour winner, flamed out, posting a birdie-free 5-over 75 to finish at 5-under.

The win earned Schauffele an invite to next week’s British Open at Royal Birkdale, as well as a spot in next month’s PGA Championship at Quail Hollow.

The 23-year-old Schauffele receives a two-year PGA Tour exemption and automatic spots in most of the Tour’s 2017-18 big events and invitationals, including the SBS Tournament of Champions, the Masters, and THE PLAYERS Championship.