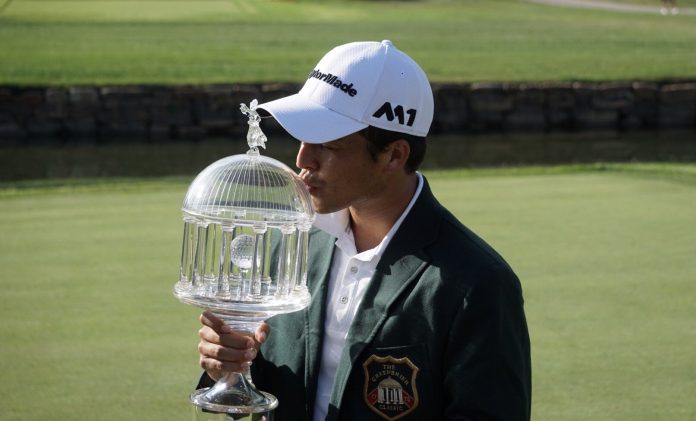 Coming into this week, all six previous editions of the Greenbrier Classic featured a come-from-behind champion.

Xander Schauffele, who started the day three shots behind 54-hole leader Sebastian Munoz, posted a final-round 3-under 67, highlighted by a near-perfect performance on the 18th hole.

Standing on the final tee box, tied for the lead, Schauffele hit an incredible wedge shot on the 161-yard par 3, the only closing par 3 on Tour, to just three-feet of the hole. The rookie then calmly made the 3-footer for birdie to secure a one-stroke victory over Robert Streb.

The Greenbrier Classic has yielded a few surprise winners in its short history, but after his impressive T5 effort at The U.S. Open last month, Schauffele is not exactly in the same category as past winners such as Scott Stallings and Ted Potter, Jr..

The 23-year-old Schauffele’s win does, however, mark the fourth time in just seven years that the champion has been a first-timer.

Schauffele’s maiden victory, however, still made him only the second-biggest winner of the week.

The No. 1 winner was The Greenbrier Classic, and the entire community of White Sulphur Springs, West Virginia, for being able to host the tournament, just one year after devastating floods forced the cancellation of the 2016 event.

Many were shocked when Xander Schauffele propelled himself into contention at U.S. Open, but this performance, combined with the T14 he had at the Traveler’s Championship two weeks ago, proves that his performance at Erin Hills was no fluke.

Schauffele was playing in the second-to-last group on Sunday at the Greenbrier, and looked unfazed by the pressure of being so close to his first win.

He birdied his first hole of the day, and then added a second just before the turn to stay in the mix while many of his competitors were struggling. A bogey on 11 was the only blemish on Schaffele’s card.

Streb could have forced a playoff with a birdie of his own on the par-3 18th, but he overdrew his tee shot and was unable to hole his chip shot. Schauffele led the field in GIR for the week.

What It Means For Schauffele

This first career victory means lots of exemptions for Schauffele, who will now be able to take his hot streak to Royal Birkdale, as he qualified for the Open Championship in just two weeks.

The win marks a third top-10 in what has quickly developed into a phenomenal rookie season. He will rise precipitously up the official world golf rankings, as he came into the week at #159.

Regardless of whether people chose to consider this tournament, or his U.S. Open performance, to be his official coming out party, one thing is for certain: he is legit.

While there weren’t many conspicuously low rounds from those who started the day on the first page of the leaderboard, there were quite a few who greatly improved their standing in round four.

Ryan Blaum gave himself considerable breathing room in the FedEx Cup standings, as a final-round 6-under 64 resulted in a T7 finish, which raised him from 119th to 99th.

The 64 tied him for low round of the day with a handful of others, most notably Phil Mickelson, who was playing his first tournament in the post-Bones era. With brother Tim as his caddy, Phil was the big riser of the day, jumping 41 spots up the leaderboard (61 to 20) with a final round 64.

Joaquin Niemann, the 18-year-old amateur, who is very likely the future of South American golf, also got in on the 64 party, bouncing back from a third-round 75 and finishing T29.

Niemann was bogey-free on Sunday, with four birdies and an eagle-2 on the par-4 10th hole. The Chilean wunderkind is currently planning to play college golf in the fall at the University of South Florida, but with finishes like this, many are going to question how long he can expect to play with a lowercase ‘a’ next to his name.

Sebastian Munoz, a 24-year-old who received his PGA Tour card mainly off the strength of a 2016 Web.com Tour win in an event where he was a sponsor’s exemption, was attempting to become the Greenbrier Classic’s first wire-to-wire champion.

However, while he had his moments on Sunday, his 2-over 72 did not remind anyone of the golfer who shot a tournament low 61 on Thursday.

Starting the day with a two-stroke lead, Munoz squandered his advantage after four bogeys in a six-hole stretch from holes 4-9, but showed tremendous resiliency on the back-nine with birdies on 11 and 12, which temporarily gave him the lead back.

He stayed near the front of the pack until an untimely bogey on the par-4-16th, combined with a disappointing par on the par-5 17th, statistically the second-easiest hole on the course, left him two back with one hole to go.

Munoz was easily the best putter in the field through three rounds, but was absolutely abysmal in that regard on Sunday, looking uncomfortable and losing nearly five strokes to the field on the greens. ‘

After a surprising opening-round 63, Davis Love III threatened to become the oldest winner in Tour history at 53-years-old, but like Munoz, Love looked like a completely different golfer on Sunday.

Love had the most significant fall of the day, as his birdie-free 5-over 75, plummeted him from T5 all the way to T29.

The biggest faller of the day was Hudson Swafford, whose field-worst 7-over 77 resulted in a drop of 47 spots on the leaderboard. Swafford, the winner of the CareerBuilder Challenge back in January, had three double-bogeys in his final round.

While Streb, Jamie Lovemark, and Munoz were disappointed to leave West Virginia without a trophy (and a million dollar check), the trio still can celebrate. All three captured spots in this month’s British Open Championship, courtesy of their high Greenbrier finishes.

The Greenbrier Classic is part of the Open Qualifying Series, something of a last chance for those who desire to make it to Royal Birkdale. This week’s tournament, the John Deere Classic, only awards one Open Championship spot.

“It’s slowly sinking in; I had a couple minutes to myself in the locker room, but it has just been an incredible feeling, and honestly, it’s a dream come true.”
–Xander Schauffele, 2017 Greenbrier Classic Champion