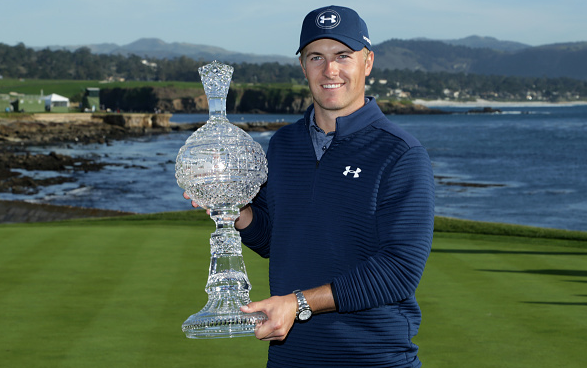 Jordan Spieth shot a bogey-free 2-under 70 on Sunday to capture the AT&T Pebble Beach National Pro-Am. Spieth entered the final round with a six-shot lead, and after a birdie on the 2nd hole, it looked like the rout was on.

But Spieth, trying to avoid any big numbers, shifted into a more conservative mode, and ran off a string of 14 straight pars. This allowed Kelly Kraft, who shot a 5-under 67, to get to within 3 with 2 holes to go.

On the par-3 17th, however, the 23-year-old Texan drained a 30 footer for birdie and essentially iced the tournament. The 18th was more of a celebratory walk for the two-time major champion, who made 5 for par and finished at 19-under – 4 strokes clear of runner-up Kraft.

Dustin Johnson fired a final round 4-under, and finished solo-3rd at -14, while Brandt Snedeker claimed the 4th spot at 13-under. Rounding out the top-five were the trio of Jason Day, Jon Rahm, and Gary Woodland, who all tied for fifth at 12-under.

Along with winning a beautiful glass trophy, Spieth pocketed a cool $1,296,000 and 500 FedEx Cup points.

Here’s a look at the final standings from Pebble Beach, along with money earned.