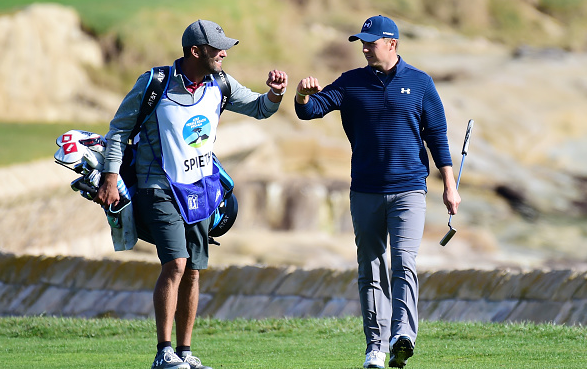 After Jordan Spieth shot matching 65s in rounds 2 and 3 to bring a six-stroke lead into the final round, the field desperately needed him to have an un-Spieth-like round 4. Unfortunately for them, Spieth refused to give up an inch.

With two birdies and 16 pars, Spieth (-19) coasted to his first victory since last May, taking the AT&T Pebble Beach Pro-Am by four strokes over Kelly Kraft.

It wasn’t the most exciting final round, but Pebble Beach is so mesmerizing, it doesn’t always need excitement.

How Spieth Did It

By playing so well in the first three rounds, Spieth was able to put on the prevent defense and enjoy the sights and sounds in round 4. Kelly Kraft went on a furious front nine tear, playing his first six holes in -4, but he was too far back to put any serious pressure on the young Texan.

Spieth hit 9 of 14 fairways and 16 of 18 greens in regulation, which helped him stay out of trouble, not carding a single bogey on the day. This was the first career AT&T Pebble Beach Pro-Am victory for the 23-year-old superstar.

What It Means For Spieth

Coming off a two-win major-less season that was good, but not great by his standards, this start to 2017 is a clear message to the league that 2015 Jordan Spieth is back. In just four events this season, all since 2017 started, Spieth has one win, two 3rd place finishes, and a T9 – shooting double-digits under par in all four.

All the early season talk had been about Hideki Matsuyama and Justin Thomas, but now the attention goes back in Spieth’s direction.

World #1 Jason Day had a very ugly front nine on Saturday with four bogeys and a double, but outside of that, Day looked every bit his lofty ranking, finishing T8 after a final round five-under 67.

That makes three sub-70 rounds, including a second round 64, so the rest from the late season layoff seems to have been shaken off.

Injuries have limited Nick Watney to just 10 starts over the past two seasons, but for the first time in years, Watney looked healthy and he played well, shooting -7 for the week, placing him in a tie for 14th.

Gary Woodland was very unimpressive in the first two rounds, going 70-73 and barely making the cut. He put his foot to the floor on the weekend, however, and his final round 65 included ten birdies. It led to his third top-10 in six events this season.

Fan favorite Phil Mickelson has been mostly in good form since coming back from two offseason hernia surgeries, but his Sunday back-nine is one he will want to forget. Three-under-par through nine, Phil’s back nine included no birdies, two bogeys, a double-bogey, and a snowman. He finished with a five-over 77, plummeting 37 spots down the leaderboard in the process.

Matching Phil’s 77 was Kevin Chappell, who started the day in the top 10. Chappell birdied four holes, but four bogeys, a double, and a triple tanked his Sunday.

Adam Hadwin has been the breakthrough Canadian in 2017, but he will not be happy about bookend 73s at Pebble Beach.

This year’s pro-am winner was the team of Ken Duke and TV host Carson Daly. After going 61-63-63 over the last three rounds, Duke/Daly finished at -33 and won by two strokes over Kevin Streelman and NFL wideout Larry Fitzgerald.

Pebble Beach favorite Bill Murray, who was with his regular pro-am partner, D.A. Points, finished in a tie for 14th at -22.

NFL head coach Bill Belichick, who had to team up with someone other than Tom Brady (Ricky Barnes), missed the cut, but will probably still sleep well tonight.

“It’s unbelievable. We had just a fantastic weekend, and after the horrid first couple of days, we just kind of had to trek through. Big hand to the superintendents of the courses and the grounds crew, long hours; it was a beautiful setting for the finish.”
–Jordan Spieth, AT&T Pebble Beach Pro-Am Champion