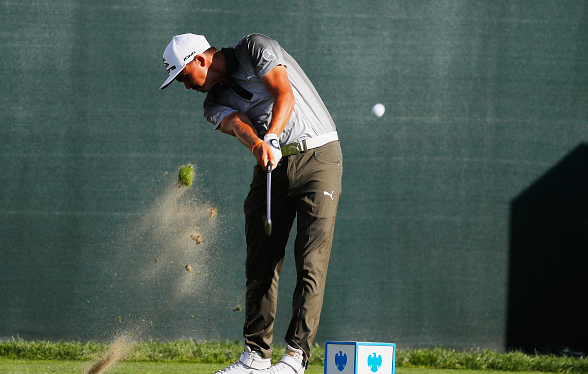 Through three rounds at The Barclays – the first round of the FedEx Cup playoffs – there is already a clear winner: it’s Bethpage Black.

Everyone knew it was a tough course, but nobody has reached double-digits under par yet, and only about 20 players have even averaged a stroke under par per round. It has been downright brutal for a non-major.

Among the Bethpage’s wreckage, Rickie Fowler has come out the least scathed through 54 holes. The American Olympian shot a third round 68 to move to 9-under par for the tournament.

He holds a one stroke lead over Ryder Cup hopeful Patrick Reed, and two strokes over Adam Scott, whose Saturday 65 is the round of the tournament thus far.

With just one bogey through three rounds, it is no surprise that Rickie Fowler is in the lead. He is in the top eight in the field in strokes gained off-the-tee (8th), tee-to-green (8th), and putting (7th).

Overall, it has been just a very solid tournament for Fowler with very few mistakes. If he holds form tomorrow, it is going to be very tough for anyone to catch him.

Adam Scott was on fire today, shooting a six-under 65 that included an eagle, six birdies, and two bogeys. That low score was in spite of hitting only three fairways on the day.

Scott has been quiet since two wins in late February and Early March, with only one top 10 since, a T10 at the WGC-Bridgestone. Justin Thomas tallied seven birdies on the day, leading to a five-under 66 and is now just four strokes behind Fowler. Kevin Streelman and Dustin Johnson vaulted into contention with four-under 67s.

Going into the week, J.B. Holmes had missed his last three cuts, and had fallen one spot out of the top 8 of the Ryder Cup standings, with automatic qualifying ending after this tournament. Holmes got off to a good start at Bethpage Black with a first round 67, but bogeyed four of his last five holes today for a disappointing 76, which drops him to T47.

Taking that 8th automatic qualifying spot looks like a longshot right now, especially with how well Reed and Fowler are playing, and if he doesn’t find form soon, he is in serious danger of not getting in as a captain’s pick either.

Phil Mickelson got himself into contention going out in four-under 32, but a bogey, double bogey finish moved him back to even par. Zach Johnson is also in that Ryder Cup mix (he is currently seventh), but he finished bogey-bogey today for a four-over 75. He has plummeted to T62.

The top 125 were invited to this tournament, with the top 100 after tomorrow getting an invite to the second round, the Deutsche Bank Classic in Boston.

“Unfortunately, that one bogey, it was more than a 180 lip-out so it has been nice tee to green and the short game has been there for me. It has been nice to see some putts finally go in. It’s a little bit of a combination of everything, but with a few putts going in, it definitely frees you up through the rest of the game, but I’ve been swinging well for a long time and I had been waiting for the putter to catch up.”
– Leader Rickie Fowler, on the difference this week.