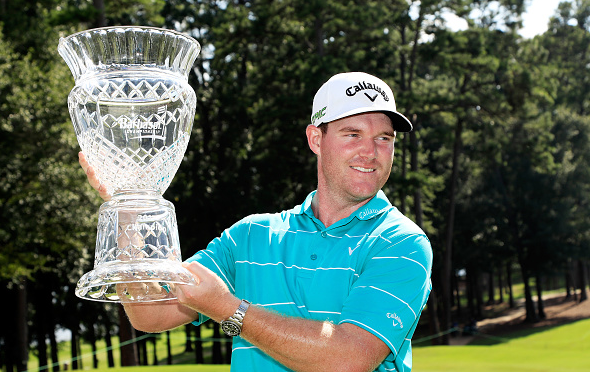 Grayson Murray posted a final-round 3-under 68 on Sunday at Grand National’s Lake Course to win the Barbasol Championship by a stroke over Chad Collins.

The 23-year-old rookie had an up and down final-round, which included an eagle, 5 birdies, 4 bogeys, and 8 pars to finish at 21-under for his four rounds in Alabama.

Murray made one of those eight pars on the final hole by sinking a 5-footer to win his first PGA Tour title.

“I was in control. I didn’t get out of my game plan once. I was going to let them make the mistakes instead of myself. I was going to make them have to birdie the last hole, or the last two holes,” said Murray, a former Arizona State star. “I was playing for par on 17 and 18. Those are two hard holes and I knew if I parred both of those they would have to do something special to beat me.”

Collins posted a final-round 68 to finish sole-second at 20-under. Third-round leader Scott Stallings (71) led a group of three tied at 19-under, along with Brian Gay (65) and Tag Ridings (69).

LSU sophomore Sam Burns, the only amateur in the field, posted a 66 to finish tied for sixth along with a group of three others. One of those other players was Ben Martin (66), who scored his second top 10 finish (T5, Quicken Loans) in three starts.

Murray also receives a two year exemption through 2018-19, as well as a berth in the 2017 PGA Championship next month at Quail Hollow, and the 2018 invitationals, including the SBS Tournament of Champions, Arnold Palmer Invitational, THE PLAYERS Championship, and the Memorial Tournament, among others.

“My goal is to get in the playoffs this year. That was my goal. I didn’t set my goals too high for my first year.”
–Grayson Murray, 2017 Barbasol Championship winner