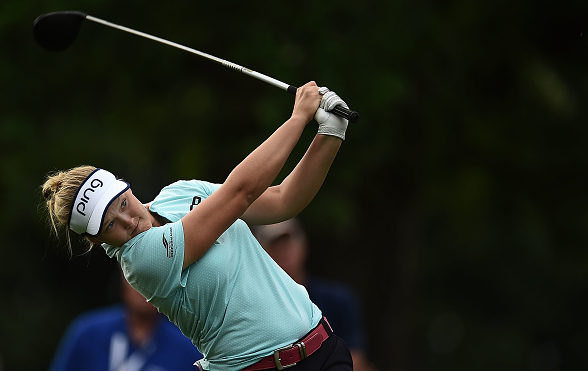 Brooke Henderson fired a bogey-free 8-under 63 at Blythefield Country Club in Grand Rapids, MI, and leads the Meijer LPGA Classic after round one.

The 19-year-old Henderson, who is coming off a top-15 at the Manulife LPGA Classic, posted six birdies and an eagle on her round. She is one shot up on a group of six players, headlined by Stacy Lewis and Lexi Thompson, at 7-under.

“I felt like today was going to be a really good day,” said Henderson, who averaged 290 yards off the tee. “Everything was just kind of going my way. I was hitting the ball really well and some putts were dropping, which is kind of a change from the last few weeks. It’s really exciting and I’m looking forward to the next three days.”

Lydia Ko, who recently relinquished her No. 1 ranking, finished at 6-under 65 which included seven birdies against a lone bogey.

Ariya Jutanugarn, the new world No. 1, finished with a disappointing 2-under 69 with four birdies and two bogeys.

“I had a really good feeling today and I made a lot of birdies. I made a lot of putts, which is great, and I feel like my game is in a really good place,” she said. “I’m really looking forward to the next three days and hopefully I can continue the strong play.”
–Brooke Henderson, Round One Leader