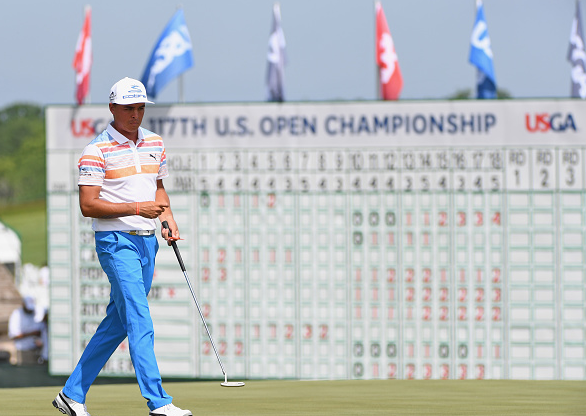 Rickie Fowler took advantage of an early morning tee time (8:51 AM), at surprisingly-receptive Erin Hills golf course, to post a bogey-free 7-under 65 and grab the 18-hole lead at the 117th U.S. Open.

“You don’t get many rounds at the U.S. Open that are stress-free,” said Fowler, who hit 12 of 14 fairways and 15 of 18 greens in regulation. “Just did a good job, knew I needed to drive it well, and from there, I was just able to manage hitting and continuing to swing well, rolling a couple in.”

It was Fowler’s best-ever opening-round at a U.S. Open. His 7-under also matches the lowest first round score since the 1980 Open at Baltusrol, when both Jack Nicklaus and Tom Weiskopf fired 7-under 63s.

Fowler, who started on the back-nine, got off to a hot start with birdies on three of the first five holes (11, 12 and 14) to quickly jump to the top of the leaderboard.

After pars on the next three holes (15-17), Fowler went on something of a mini birdie-fest, dropping three straight at the turn, (18, 1, and 2) to reach 6-under. With eight holes to go, many analysts were predicting the record of 7-under would be shattered, but Fowler seemed to play more conservative down the stretch, and cruised the rest of the way with a lone birdie coming on the par-5 7th.

Fowler, who also co-led after 36-holes at the most recent major – the Masters, was satisfied with the record-day, but understands the only lead that matters is the one on Sunday night.

“It’s cool, but it’s just the first round,” Fowler said. “It is always cool to be part of some sort of history in golf. But I’d rather be remembered for something that’s done on Sunday.”

One back of Fowler, tied for second at 6-under, is the twosome of Xander Schauffele and Paul Casey.

Recent Wells Fargo winner Brian Harman, along with Englishman Tommy Fleetwood and Brooks Koepka round out the top-5 at 5-under 67.

While Fowler cruised on Thursday, some of the biggest names flamed out, most notably defending champion Dustin Johnson, who posted a 3-over 75 in a round which included just one birdie.

It marks the third straight over-par round for DJ, going back to the Memorial where he missed the cut with a 78-74. In this last three rounds, the World No. 1 is 11-over par.

In fact, of the world’s top 10 ranked players, only Fowler and Sergio Garcia (-2) finished under-par. The other eight (of the top 10) combined for a 26-over-par.

.@RickieFowler's 7-under 65 tied the lowest first-round score in the #USOpen, in relation to par. pic.twitter.com/19AGOv3PjE

Hole of the Day

Putts of the Day

World No. Rory McIlroy eagles the second at Erin Hills.

Jonathan Randolph with a long bomb putt usually seen across the pond. Up, down, and take a left.

Chip Shot of the Day

Paul Casey chips in for eagle on the 1st hole.

A first-hole eagle is a heck of a start for @Paul_Casey on No. 1 at the #USOpen. https://t.co/sygzJpyPo4

“I feel like I’m better throughout my whole game. I’ve been able to tighten things up. I used to not be a very good bunker player, and now I feel like I have a lot of confidence, and stats show I’m one of the best … I’ve been driving it well. Driving stats have gone up.”
–Rickie Fowler, on the state of his game.