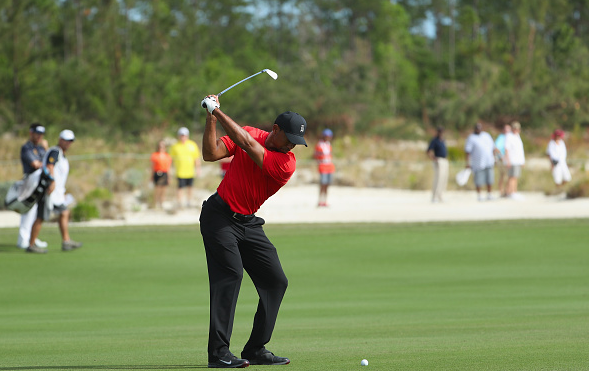 Despite a strong charge from Henrik Stenson, Hideki Matsuyama (-18) holds off for a two shot victory in the Bahamas. Now a winner in 4 out of his last 5 events, Matsuyama, made an up and down par on the final hole to claim the Hero World Challenge.

Race to Dubai winner, Henrik Stenson, finished in second alone after a final round 68. Rounding out the top five were Rickie Fowler, Matt Kuchar and Dustin Johnson.

On a windy Sunday, Bubba Watson fired the round of the day with a 5-under 67. Watson made seven birdies and just two bogeys over the course of his round to move five spots up the leaderboard into T6.

The defending champion, Watson, could not defend his title and finished 13 shots worse than last year when he finished with 25-under-par.

Playing alongside Matsuyama, Henrik Stenson, made a charge on Sunday but a three putt par on the 15th and a lip-out birdie at the last caused him to fall two shots short of a playoff.

Rickie Fowler fired a bogey-free 69 to jump three spots up the leaderboard into a share of 3rd. Fowler and Patrick Reed were the only two players without a bogey in the final round.

It seemed as if the wheels fell off for Tiger Woods in his final round. Tiger was level par going into the 5th hole and then the roller-coaster round started to begin. Tiger only made three pars in his final 14 holes, which he played in 4-over.

Despite the Sunday struggle, Tiger, had an excellent week. Tiger led the field with 24 birdies but 8 bogeys and 6 doubles held him back from making it a magical week.

Hideki Matsuyama came into the day with a seven shot lead but a round of 1-over-par allowed others in the field to get into striking distance. Matsuyama came to the 18th with a two shot lead and found the left rough off the tee. After hitting his approach over the green, Matsuyama hit an excellent chip shot to inches to seal his 4th victory in his last 5 starts.