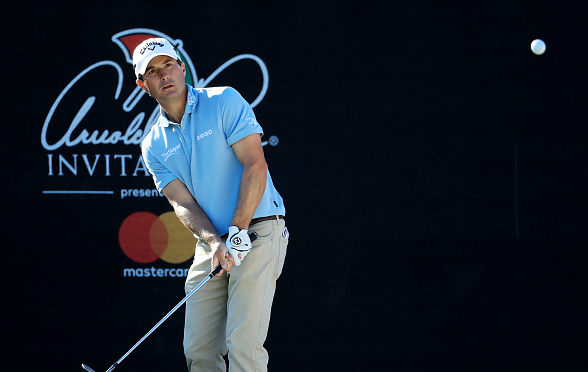 Reminiscent of the man whose name is on the tournament, Charlie Hoffman was amazingly resilient in round three at Bay Hill – showing that he can be knocked down, but not knocked out.

Hoffman, the second-round leader, played poorly for a portion of the day, with bogeys on his first two holes, and then two more on 14 and 15 to reach +2 with three to go. He then, however, finished birdie-birdie-birdie, posting a one-under 71 and ending the day where he started it: on top of the leaderboard.

This time he has company though, as Kevin Kisner shot a four-under 68 to tie for the lead at -11. The duo will comprise Sunday’s final pairing at the Arnold Palmer Invitational Presented By Mastercard.

They lead the international trio of Tyrell Hatton, Marc Leishman, and Matthew Fitzpatrick by three strokes.

Neither member of today’s final pairing of Hoffman and Emiliano Grillo, wanted the lead early, as both started their rounds bogey-bogey. Hoffman calmed down considerably after that, carding two birdies and nine pars over his next 11 holes.

Hoffman then bogeyed 14 and 15, but once Kisner started to mount a decent lead, Hoffman hit the green in two on the par 5 16th, which led to a birdie. He then birdied 17, and drained a 71-foot putt on 18 for a third consecutive birdie.

Kisner, a 32-year-old who is looking for his second career victory, was well in control most of the day, cancelling out two mid-round bogeys with six birdies to reach the top of the leaderboard. Kisner was incredible off the tee today, missing just one fairway on the day.

Two members of the Tour’s young wave of stars, Rory McIlroy and Rickie Fowler, were quiet through two rounds, in which McIlroy was +1 and Fowler was +2.

Today, however, was a completely different story for both, as a pair of seven-under 65s were the low rounds of both the day and the tournament. As a result, McIlroy moved up 38 spots on the leaderboard to T8, and Fowler rose 47 positions to reach T11.

McIlroy was bogey-free, and his seven birdies equaled his total from the first two rounds combined. Fowler, who won the Honda Classic three weeks ago, fought off an early double-bogey, carding seven birdies and an eagle over his last 15 holes.

Tumbling Down the Leaderboard

Emiliano Grillo was the first round leader and was solo-second after 36 holes. Very little went right for Grillo in round three though. After the bogeys on one and two, Grillo continued to spiral out of control, and after a quadruple bogey on six, his round was largely left for dead.

The young Argentinian went birdie-free over his final 11 holes and posted a six-over 78. The quadruple bogey was especially puzzling, because Grillo had been dominating the par-5s, with three birdies and two eagles on his previous five par-5s.

Two shots in the water, the second of which resulted in a frustrated Grillo chucking his 3-iron into the pond, led to the snowman plus 1.

Jason Day, the tournament’s defending champion, continued the inconsistency that has marred his recent play, shooting a three-over-75 and plummeting from just outside the top 10 to a tie for 39th. Day was atrocious on approach shots, posting a dismal -4.7 in strokes gained: approach-the-green.

“Putter was better, speed was better on the greens. I had a bit of a chat with Phil Canyon last night, felt like it was good, but the speed was off, and commitment wasn’t quite there compared to where it is on the putting green when we practice, so just tried to be more committed to the lines and it seemed to work, just a little more aggressive with the speed as well. It was nice to see a few drop.”
–Rory McIlroy, whose 65 tied the low round of the tournament.