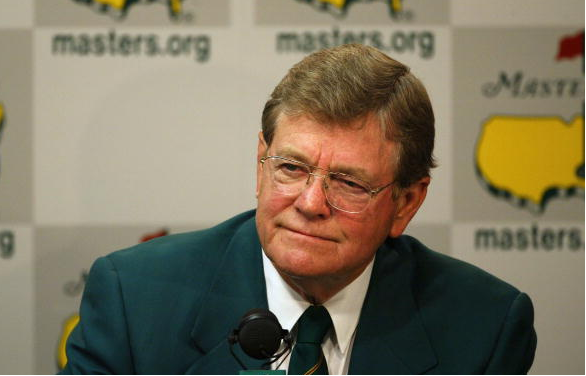 Hootie Johnson, the Augusta National chairman who made headlines in the early 2000s for his faceoff against Martha Burk of the National Council of Women’s Organizations, died Friday morning. He was 86.

A South Carolina banker by trade, Johnson was the chairman of Augusta National for eight years, and oversaw many changes at the historic club, most notably the expansion of TV coverage to all 18 holes of the Masters. However, he will always be remembered for his firm stance against the bully Burk.

In 2002, Burk, who made her living via threats and demands, warned Johnson that he should invite female members to his club “so that it wouldn’t become an issue at the Masters.”

After Burk’s threat, Johnson gathered the press and read a statement that essentially told Burk to shove it. Johnson famously said that women may one day be invited, but it would be the club’s decision and “not at the point of a bayonet” by Burk and her ilk.

Johnson even went so far as to cancel the Masters television sponsors, including IBM, Coca-Cola and Citigroup. The move was considered a stroke of genius, as it created goodwill with sponsors and golf fans alike, while crippling Burk’s leverage. Without any advertisers to beat down, Burk eventually slunk away as the big loser. Television sponsors returned in 2005. And women were admitted with little fanfare in 2012

Johnson is survived by his wife, Pierrine, four daughters and their husbands, and 10 grandchildren.

EA Sports To Launch ‘PGA Tour: Road to the Masters’