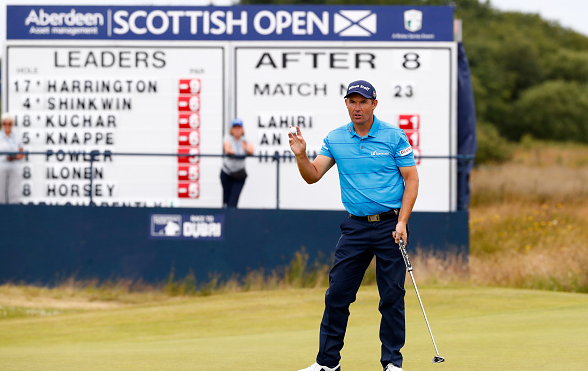 Ireland’s Padraig Harrington holds a share of the lead at the Scottish Open after posting a bogey-free 4-under 68 at Dundonald Links on Friday.

The 45-year-old Harrington, a three-time major champion, is at 9-under, alongside England’s Callum Shinkwin and German Alexander Knappe.

Despite a career that’s valleyed more than peaked, since his glory seasons of 2007-08, the Irishman seems content as he prepares to return to Royal Birkdale, the scene of his second Open title.

“I will win tournaments, that’s for sure, but I’m not turning up trying to change my legacy,” said Harrington. “I’ve kind of come to the conclusion that I’ve pretty much done what I’ve done in the game of golf.

One back of Harrington is Ian Poulter, who carded a second-round 3-under 69. The 41-year-old Englishman is tied with Aussie Andrew Dodt at 8-under.

American Rickie Fowler, who shot 2-under 70, headlines a group of three players tied for sixth at 7-under.

Another American, Matt Kuchar, is level with France’s Alexander Levy at 6-under. First round leader Mikko Ilonen struggled to a 2-over 74 and leads a group of four players at 5-under.

Rory McIlroy finished with a 1-under 71 and missed the cut for the third time in four starts.

With the Open Championship set for next week, McIlroy’s struggles couldn’t have come at a worse time. It’s the worst stretch of his Hall of Fame career.

“I’m just waiting for something, some sort of spark, something to go right, and the last couple weeks haven’t been like that,” said McIlroy. “Just got to keep plugging away and hopefully it turns around next week.”

Harrington signs for a 68 ✍️

Ian Poulter with the clanker on the 13th for birdie.

“I enjoy being out here. Why bother beating myself up over it? If I win another major… not a huge deal. I’ve found myself in a better place by deflecting a little bit in that sense.”
–Padraig Harrington, commenting on his career struggles