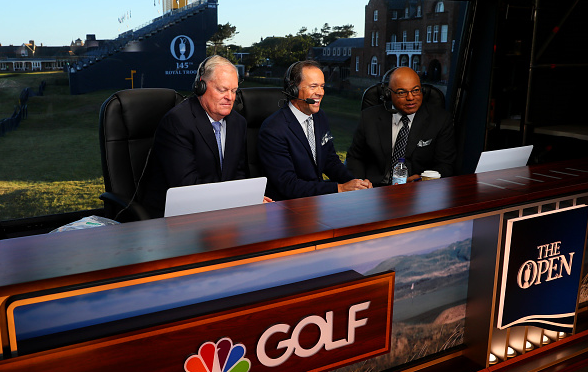 Special message to anyone feeling a week-long “sickness” coming on: make it next week.

That’s because NBC and The Golf Channel are going to be providing 140 hours of Open Championship TV coverage, starting Monday, and all way through Sunday afternoon – including a major-record 78 hours of live, on-site coverage at Royal Birkdale.

Of those 78 hours, nearly 50 will be devoted to live-tournament coverage from Thursday through Sunday. It will be impossible to be productive at work during that time, so why leave the couch?

In addition, during non-playing times the Golf Channel will be frequently airing live editions of Morning Drive and Golf Central Live.

There will even be a special “Midnight Drive” from, yes, midnight to 1:30 AM on Thursday, as a lead-in to the live coverage of round one. There will also be encore showings, and a Saturday-afternoon (4:30-6:00 PM) highlight special.

For the 21st consecutive year, the Open Championship telecast will be led by the familiar voice of Mike Tirico. Terry Gannon and Dan Hicks will provide play-by-play.

Duval will also be playing in The Open. 1998 Open Champion Mark O’Meara will also join Tirico in the booth for much of the final two rounds.

In addition, NBC and the Golf Channel will be using their regular analysts and on-course reporters. Notables among them include David Feherty, Roger Maltbie, and Jimmy Roberts.