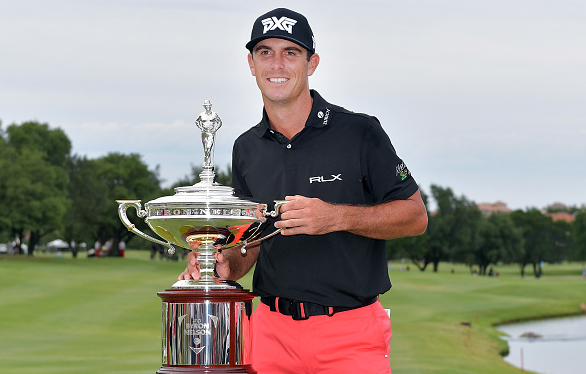 In 2014, a 27-year-old University of Florida product by the name of Billy Horschel put together possibly the greatest stretch of play in FedEx Cup playoff history, finishing the final three events T2, 1, 1 to snatch the FedEx Cup and its $10 million prize from a loaded field.

The unexpected tear propelled him from world #59 to world #14, and many thought it would act as a catalyst to Horschel becoming consistently among the best in the world.

Unfortunately, it did not quite happen that way for Horschel, who has remained competitive on Tour, but between 2015, 2016, and the first half of 2017, he has rarely looked like the guy who set the playoffs on fire.

He did not qualify for the 2017 Masters and came into the Byron Nelson Classic off four consecutive missed cuts, but after taking down a suddenly rejuvenated Jason Day on the playoff first hole, Horschel is back in the winner’s circle for the first time since the 2014 Tour Championship.

It is not an 11th victory in a row, something Lord Byron (unbelievably) once did, but Horschel will happily take career win #4, as his final round one-under 69 allowed him to best a strong field in Dallas.

How Horschel Did It

Short story: putting. Longer story: Horschel began the final round at -11, one shot behind James Hahn.

Horschel then fell two strokes behind Hahn after back-to-back bogeys on 12 and 13, but then nailed a 59-foot birdie putt on 14 to set his round in the right direction. It was the longest made putt of his PGA Tour career, and it could not have come at a better time.

Hahn faded somewhat down the stretch (although nearly forced his way into the playoff when his incredible second shot on the par-4 18th lipped out), and after Horschel and Day both parred the 72nd hole, the Byron Nelson Classic went into a playoff for the second consecutive year.

They went back to No. 18, where both Horschel and Day missed long birdie putts. Horschel tapped in for par, and then when he was getting ready to head back to the tee, something unexpected happened: Day somehow missed his three-foot par putt, which handed the championship to 30-year-old former Florida Gator.

Horschel lead the field in strokes gained: putting for the week, and his total yardage of made putts was the second best he has ever had in a tournament.

What It Means For Horschel

The victory was much welcomed for Horschel, as it turns around a 2017 that otherwise had not been anything special. He had two top 10s in 15 starts, but had gone cold as of late, missing his four previous cuts coming into the Byron Nelson.

He was one of the best players to not qualify for The Masters this year, a distinction he will not have to worry about matching next year.

Coming into this week, his short game had been dreadful, but his performance in Dallas in that regard should give him enormous confidence as the season progresses.

Jason Day: Is He Back?

Yes, that final putt for Jason Day was bad, especially for a guy who led the Tour in putting last year, but overall, it was an extremely promising week for the man who began the year ranked #1 in the world.

Battling injury and personal problems, Day had been surprisingly poor in 2017.

Before this week, he had not finished in the top 20 of a tournament since mid-February and was T60 at last week’s PLAYERS Championship.

Also coming into the week, Day had only one tournament in 2017 where he had more than one sub-70 round, but he was consistently good this week, posting 68-69-63-68 (-12). The rest of the Tour definitely took notice of the runner-up finish.

After winning The Masters last month, defending Byron Nelson champion Sergio Garcia could completely tank the rest of his season and it would still be a rousing success, but his game has shown a disturbing trend in the past two weeks.

Both at the Byron Nelson, and last week at THE PLAYERS, Sergio exploded in rounds 2 and 3 after unimpressive opening-rounds, only to plummet down the leaderboard on Sunday with terrible final rounds.

At TPC Sawgrass, it was a dismal final round 78 that dropped him from contention to a T30 finish. This week, Sergio opened up with a three-over 73, but then again roared onto the front page of the leaderboard with a 65-64 in two middle rounds. Sunday struggles then hit again, as Sergio was +6 through 13 holes before two late-birdies only slightly palliated a 4-over 74.

He finished at 4-under for the tournament, which left him in a tie for 20th.

The glass-half-empty types would deride Jason Kokrak for his weekend 72-70 after building up a five-stroke lead through 36 holes, but in all, it is a week Kokrak should be very happy with.

His second round 62 was the low round of the tournament, and while he would have liked to have won (he finished in solo-fourth), many players lose a tournament lead, or two, before notching win #1.

Kokrak will learn this, and his time is likely coming soon. At the very least, it was a very encouraging result for a golfer who had not finished better than T56 since February. It is his first top-10 since a T8 finish at the 2016 Deutsche Bank Championship.

Bud Cauley had a largely difficult Sunday, as four bogeys were too much to overcome in his final round even–par 70, but his T5 finish marks a fourth-straight top 10, one more top 10 than he had all of last season.

World #1 Dustin Johnson actually had his worst finish of the season, but any time that someone can say that about a T13, it signals that player is having one incredible year. DJ shot a 1-under 69 on Sunday to finish 6-under for the week.

“Four missed cuts and then to come in here, nothing that really says I’m going to play well, and I played well.”
–Billy Horschel, 2017 Byron Nelson Champion