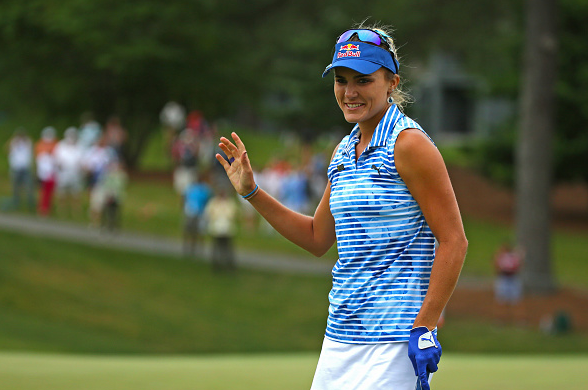 Lexi Thompson fired a final-round 6-under 65 on Sunday to capture her eighth LPGA Tour title at the Kingsmill Championship.

In Gee Chun, who posted a final round 4-under 67 to close at 15-under, finished solo-second, five shots behind Thompson.

Chun was three shots back to start the day, and cut the lead to two after a birdie on the par-5 7th hole. But Thompson answered with a birdie of her own on the 9th, to get back to a 3 shot cushion, which she never relinquished.

After back-to-back birdies on 14 and 15, to go up 5, the final three holes were something of a formality, and a well-deserved victory lap, for the 22-year-old star, and fan favorite.

“Oh, it means the world to me. Annika [Sorenstam] has been a player I’ve always looked up to not only how she played on the course, but how she is off and how she gave back to the game. This is a huge honor. I wasn’t focusing on that and I didn’t actually know that until maybe last night.”
–Lexi Thompson, commenting on breaking Sorenstam’s tournament record.