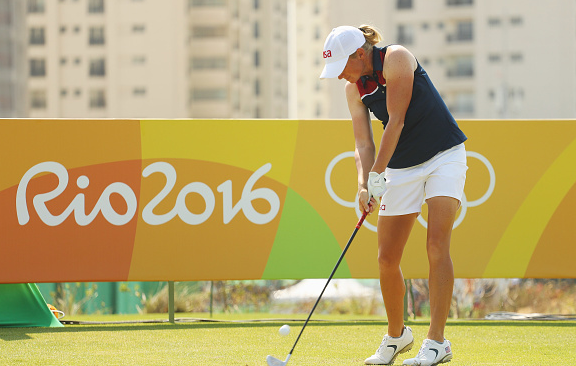 Going into the week, the LPGA’s big three of Lydia Ko, Ariya Jutanugarn, and Brooke Henderson were justifiably subjected to most of the gold medal hype.

Despite being under the age of 21, all three have shown the skill and mental makeup to thrive on arguably the biggest stage women golfers have ever had. All three have won a 2016 major, and have separated themselves as their own tier in the upper echelon of women’s golf.

After two rounds of the first edition of women’s Olympic golf in 116 years, all three are playing well, but the story continues to be a Hall of Famer who had strangely been under the radar: Inbee Park. The 28 year old star from South Korea has just one bogey in 36 holes, and is at -10 for the tournament after her second consecutive 66. She has a one-stroke lead over American Stacy Lewis.

Park had not shown even decent form since March, dealing with a thumb injury for the better part of four months. Now, she is playing like she is healthy and she looks like every bit as good as she did when she won five events, including two majors, in 2015. With a stacked leaderboard, her margin for error is small, but there may be no golfer on the planet better prepared for the competition.

Inbee Park got to this position with back-to-back 66s. She limited her mistakes and showcased the putting stroke that has made her an LPGA legend. She took advantage of the scoring holes down the stretch, with birdies on three of her last four. Her one bogey in two days is the lowest in the field.

A Back Nine Clinic

Two of the biggest movers up the leaderboard today were Stacy Lewis and Brooke Henderson. Lewis birdied an astounding 11 holes on the day and her 63 is the single lowest score in the field over two days; It ties the low score at Olympic for men or women. After going out in four-under 31, she birdied 15, 16, 17, and 18 to finish at 8-under for the day. She only missed one fairway and only needed 24 putts.

Like Lewis, Henderson birdied the final four holes, good for a bogey-free, seven-under 64. Henderson got off to something of a slow start with a modest -1 in round one, but now she is dialed in, which should be a scary thing for her competitors.

A lot has been said about the high quality of Korean golfers in the field, but so far, the U.S. is keeping up. There was the 63 posted by Stacy Lewis, and Gerina Piller was bogey-free on the day. Lexi Thompson got off to a poor start, going out in +2, but was able to steady herself on the back nine for a round of even par.

Those who love seeing national pride would really like this leaderboard. Of the 12 players in the top 10, 10 different countries are represented: Korea, United States, Canada, Great Britain, Denmark, Norway, Chinese Taipei, India, Australia, and Thailand.

Not Her Best Today

Ariya Jutanugarn has won four of her last nine tournaments, including three in a row in May, and got off to a hot start in this one, shooting a round one-leading 65. Jutanugarn found things more difficult today with just three birdies to three bogeys, in a surprising round of even par.

The Pride of India

Aditi Ashok might be the best surprise of the first two rounds. The Indian golfer, who is the youngest player in the field, shot her second consecutive three-under 68 to tie for 8th place after two rounds. Golf is not a popular sport in India (there is only one public course in the entire country), especially among women, but India puts a lot of pride in the Olympics, and if she can find a way to medal, it could be enormous for the future of Indian golf.

“I wouldn’t say it’s easy. Having a lot of pressure is really hard, especially when you’re playing bad or having a tough time, but at the same time I try to think very positive; that means I have much people on my side and that much people watching me and cheering me on so, yeah, I try to take the positive out of it.”
–Inbee Park, speaking about the high expectations of the Korean media