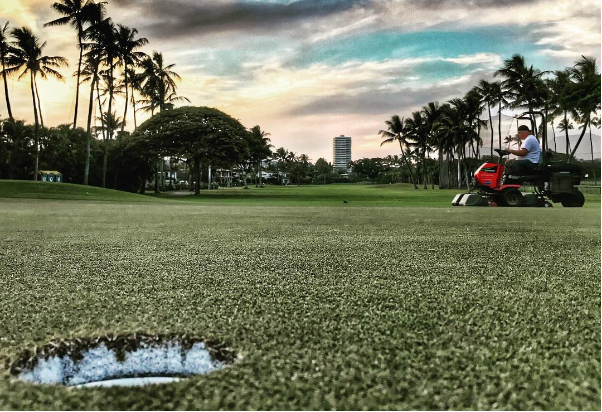 The Sony Open kicks off in about an hour from Waialae Country Club in Honolulu, Hawaii.

The ocean-side course has hosted the PGA Tour’s annual Hawaiian stop since its inception in 1965, making it the third longest run for a host course on the Tour.

The golf-insiders seem intent on making us jealous by posting pics on Instagram of the beautiful Hawaiian views that make golfers just drool – especially those stuck in cold and snowy New England.

Here’s a round-up of some of the best.

The PGA Tour gives us a nice photo of the grounds crew prepping the championship course – from the angle of a gopher.

The first full-field event of 2017 kicks off today at @sonyopenhawaii. ??️

Wesley Bryan gives us the exact opposite – a view of Diamond Head from the angle of a bird.

Taylormade with a simple photo of the golf course, and PGA Tour-looking backdrop.

The par-3 17th at Waialae Country Club plays 194 yards. With a slight wind into you and off the right, what shot are you playing? #CallYourShot #SonyOpen

Another one from Taylormade. This one is a little more marketing-looking (I know, that’s the idea) – but still very drool-worthy with the TM sticks of Olympic golf medalist Justin Rose, and the official Sony Open flag.

Team Rose has arrived at the #SonyOpen with some new tools in the bag. #PROTOirons #MGwedge

PXG showing off its Tour staffer Chris Kirk in the popular slo-mo clip.

The views in Hawaii are ???!! Ball in the air at 7 AM for the first round of the @sonyopenhawaii!! #boom #2017herewecome

The Walkers, Erin and Jimmy, at the their hotel which seems to have a nice view of the Waialae course.