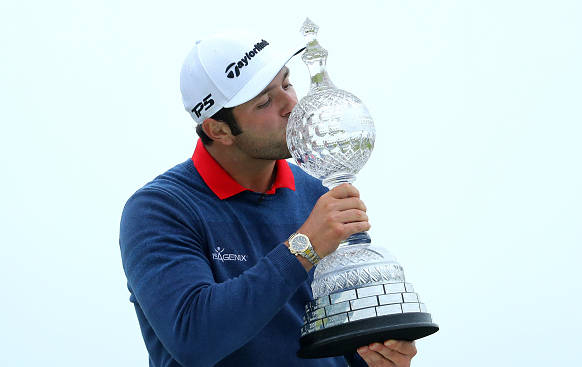 Jon Rahm closed with a 7-under 65 on Sunday at Portstewart Golf Club to capture the Dubai Duty Free Irish Open by six strokes over Richie Ramsay (65) and Matthew Southgate (66).

Rahm posted two eagles and five birdies during his final round to finish at 24-under-par, a new tournament record.

It is the young Spaniards second win in just his 25th start as a Tour professional. In February the former world No. 1 amateur won the PGA Tour’s Farmers Insurance Open at Torrey Pines.

As part of the Open qualifying series, Drysdale, Ramsay, and Fox secured the the three invites available for next week’s British Open at Royal Birkdale.

The win netted Rahm $1.166 million and will reportedly move the former ASU star to No. 8 in next week’s world rankings.

Thank You to all the fans in Northern Ireland this week. You all were tremendous. Thank you to @McIlroyRory for being a great host.

"It feels amazing to be a @EuropeanTour winner!" pic.twitter.com/V2fINCITHs

“Well, it’s really hard to explain right now. I know the trophy is right next to me and my name is going to be there for ever now, but it seems hard to believe that it’s happened. It’s kind of somewhat surreal. It’s hard to explain. I just look at it and I see Nick Faldo, I see Jose Maria Olazabal, I see Nick Faldo again, I see Colin Montgomerie, Ian Woosnam, Seve. That’s a great list of great — and greatest European Tour players ever, and to have my name next to it, and the last one, Rory McIlroy, it’s so special. Not just to win this event but to win it at the place I just won it, Portstewart, great golf course, with the fans supporting me better than I’ve ever seen anybody support me. It’s been unbelievable.”
–Jon Rahm