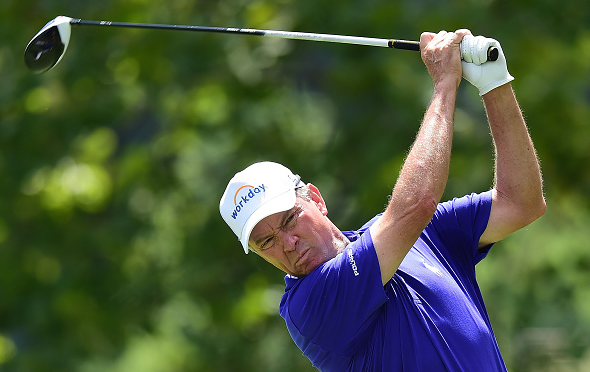 Sebastian Munoz posted a 2-under 68 on Saturday at Old White TPC and will take a two-stroke lead into Sunday’s final round of the Greenbrier Classic.

The 24-year-old Colombian is at 14-under-par, two strokes ahead of Robert Streb (65). Munoz and Streb will be the final pairing on Sunday.

Rookie Xander Schauffele and Jamie Lovemark are tied at 11-under after matching rounds of 66.

The 53-year-old Love is seeking to become the oldest-ever PGA Tour winner, and the 21-time PGA Tour winner feels his experience will come in handy come Sunday.

“Under the pressure, I know how to handle things,” Love said. “I’ve seen some guys this week kind of go up and down and make some rookie mistakes, including myself. I’m going to make mistakes too, but hopefully the experience will pay off.”

Sam Snead, who won the Greater Greensboro Open in 1965, at 52 years, 10 months, 8 days, still remains the oldest-ever Tour winner. Ironically, Snead won his very first professional tournament in 1936 at the West Virginia Closed Pro, which was played at The Greenbrier’s Championship Course and Old White Course.

“I think I had a good round today by the way I just hit the ball from the tee again. A lot of missed fairways in the first nine. Trying to get — I think I was getting a little too quick, out of rhythm.”
–Sebastian Munoz