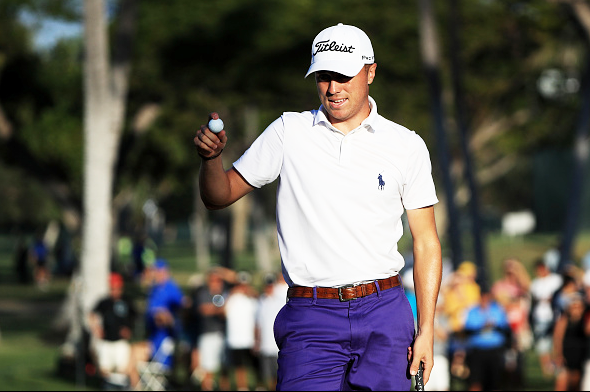 To those golf fans who skipped out on watching the Sony Open because “it’s January”, you did so at your own risk. You gambled and lost.

Justin Thomas, who yesterday, became the 7th man in PGA Tour history to shoot a 59, followed that magical round with a 64 to post the lowest 36-hole total in Tour history.

After two rounds at the Sony Open in Honolulu, Hawaii, Thomas leads by five-strokes over one of the Tour’s premier bombers: Gary Woodland, and seven over the trio of Hudson Swafford, Justin Rose, and Zach Johnson.

Thomas may have a comfortable lead at the moment, but there are a lot of guys within range who could make this weekend interesting.

How The Leader Did It

Justin Thomas, who has already won twice this season, including at last week’s SBS Tournament of Champions in Maui, is on a different level as of late.

It is difficult to follow up a 59 with a respectable round, but Thomas did it, carding birdies on four straight holes (9-12), and for the second straight day, an eagle on his last hole.

Three bogeys were surprising, but seven birdies and an eagle were good enough for the 6-under 64. Thomas may not have been as dominant on the greens in round two as he was in the opening round, but his accuracy was a close match – hitting only one less fairway (7/14) while hitting the same number of greens (14/18).

Going Great in Round 2

Two-time major winner Zach Johnson shot just one-under in the first round, which at this course with Justin Thomas’s insane opening, left him well back of the lead.

Round two, however, was a different story for ZJ. Johnson was bogey-free, with seven birdies and an eagle to get himself into contention. If he is somehow able to overtake Thomas, it would be his 13th career PGA Tour victory.

Augusta resident Charles Howell III has done through two rounds what he does best: make an early-season presence. A four-under 66 has him at nine-under for the tournament and in a tie for 6th, on pace for yet another January top-10.

Chad Campbell was likely unhappy with his over-par (+1) opening round, but made the most of round two, scoring an 8-under 62 that was beat by only Zach Johnson and Bryce Molder. The 42-year-old Texan, has zero bogeys through two rounds (his +1 first round came from one birdie, one double-bogey, and 16 pars), and hit 15/18 greens in regulation in round two.

Vijay Singh has nothing left to prove, but could have padded his legacy even further with a strong performance in Honolulu.

He was on the periphery of the top 10 after a 5-under 65 in round one, but the Fijian legend looked closer to his age on Friday, with five bogeys to cancel out his five birdies, shooting an even-par 70 to fall back into a tie for 48th place.

The 2009 Open Championship winner Stewart Cink is on a quest to show that he is still as good as he ever was, and a first round 66 had him in a good place. However, an even-par second round, where he was +2 on the front nine caused him to plummet back into a tie for 57th.

Jason Dufner at least looked safe to make the cut after a round one 5-under 65, but the former PGA Champion couldn’t do much right in round two. An eagle on the 18th could not undo all the damage he did over the first 17 holes, as a three-over 73 left him one-off the cut line.

A Surprising Leader Among the Japanese

The odds that Hideki Matsuyama would be the best among a large Japanese contingency competing at the Sony Open would have been next-to-nothing, but surprisingly, after two rounds. The white-hot Matsuyama, who has finished in the top two of his last six starts has only been the third best from Japan in the field.

Satoshi Kodiara, who actually ranks 96th in the world, has been a stud on the Japan Tour, but is killing it in his 2017 PGA Tour debut. In three previous PGA Tour events, he has not finished higher than 71st, but the 27-year-old from Tokyo followed up his first round 65 with a second round 66 to stay in contention, currently in a tie for 6th place.

Better known Hideto Tanihara also leads Matsuyama, but only by a shot. Matsuyama shot a 3-under 67 in the second round, placing him in a tie for 24th place.

“I played great. I really hit a lot of quality shots today. The three bogeys I made were just terrible; they were lack of concentration, or just not playing smart, but I obviously had a great day out there. To finish with the eagle was huge, they bogeys on 13 and 17 were a bit of a bummer, but I made enough birdies on the back nine to counteract that, so it was great to back up the day with that.”
–Justin Thomas, 36-hole leader