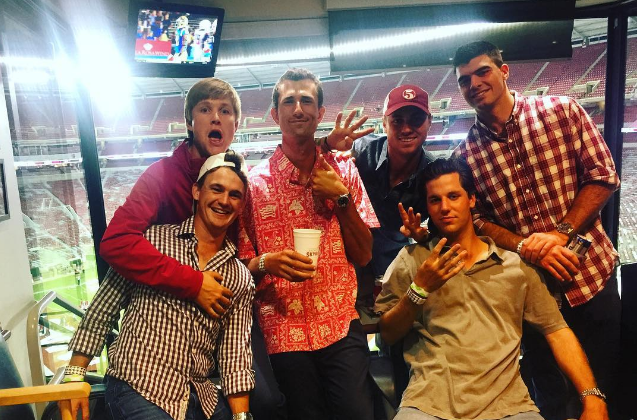 PGA Tour players Justin Thomas and Bud Cauley, both Alabama alums, took advantage of their down time from the tour this past weekend, and headed back to Tuscaloosa for a little golf, and some football.

The former Crimson Tide golf stars played golf at Indian Hills in Tuscaloosa, did some reminiscing about their glory days at the on-campus Jerry Pate Golf Center, and (of course) took in the Alabama – Kentucky game with some prime seats at Bryant-Denny Stadium (Alabama won 34-6).

A little golf to warm up for the big weekend.

some golf to start off the weekend in t town with @justinthomas34 and team! countdown to gameday!

Not many places make me happier to be at.. Little weekend trip with @budcauley to Tuscaloosa to see the guys and watch some football.. Look out TTown! Jerry Pate Center lookin nice! #Bamagolf

Then it was time for some Bama football.

And finally closing out the weekend with some Run DMC & Aerosmith.

Thomas will be back in action at the Safeway Open in Napa, where he’ll be looking to continue his impressive play. JT finished in the 12th spot in the final FedEx Cup standings. He was reportedly one of three, along with Bubba Watson and Ryan Moore, for DL3’s final Ryder Cup Captain’s pick.

Cauley played on a Major Medical Exemption during the 2015-16 season, and appears to be returning to form after a 2014 shoulder injury. He finished the season strong with with two Top 10s, a T8 at the John Deere and a T10 at the Wyndham.