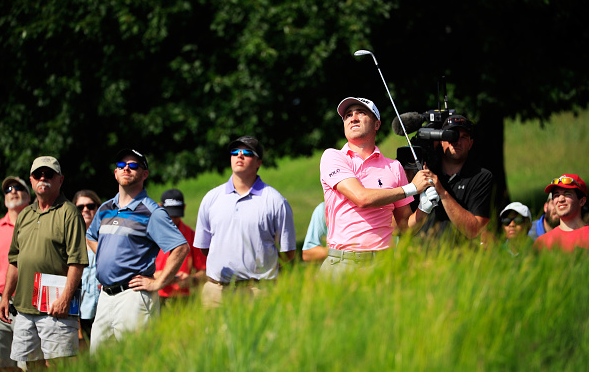 For those without intimate knowledge of the Champions Tour, Charlie Post is an amateur who finished at 31-over after two rounds at the Senior U.S. Open, and missed the cut.

Nobody in the Quicken Loans field is anywhere near the Charlie Post zone, but the course has played tough, and many in the field are discouraged with what they have been able to do through 36 holes.

Perhaps the most disappointed is Justin Thomas, a three-time winner this season, and the world’s 12th ranked golfer.

Compared to the field, a second-round one-over 71 doesn’t seem terrible, but combined with his first round 4-over 74, a round in which he had a quadruple-bogey 9 on the 10th hole, it left Thomas at 5-over, where he missed the cut by a stroke.

Since his record-setting 9-under 63 in the third round of the U.S. Open, Thomas has been nowhere near his best. He followed up that 63 with a 3-over 75 on Sunday at Erin Hills, and he’s missed the cut in both tournaments he has entered since (Travelers, Quicken Loans). In fact the 24-year-old Kentucky native has posted over-par in all five rounds.

Clutch up and down to keep out of the double digits ?? fought hard those last 6 to have a chance tomorrow! #golfishard #ihitasneakyshank pic.twitter.com/npusEs4Q78