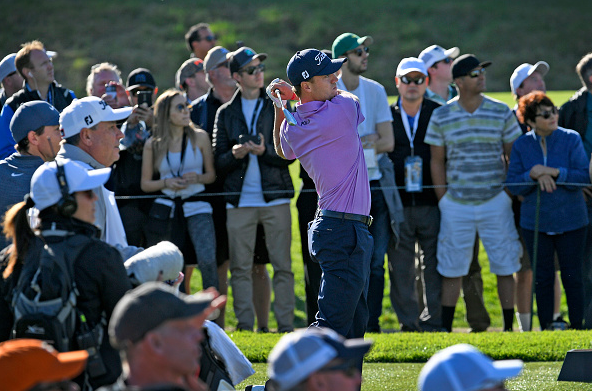 Justin Thomas was all the talk on Twitter Sunday night, and it wasn’t for his eighth career victory at the Honda Classic. The 24-year old star was getting hammered for having a fan tossed after being heckled on the 16th hole at PGA National.

“Who said that? Are you kidding? You just said for that ball to get in the bunker. Was that you? Enjoy your day, buddy. You’re gone,” said Thomas.

After his Honda win, the Kentucky native expounded, but wasn’t regretful:

Just, again, I feel like there’s no place for that, and I hit it and my ball is in the air and it’s not — it’s in the middle of the fairway and he’s yelling for it to get in the bunker. I was like, okay, I’ve had enough. So I just turned around and asked who it was, and he didn’t want to say anything, now that I had actually acknowledged him. So he got to leave a couple holes early.

I don’t want to kick someone out just to kick them out. It’s just it’s so inappropriate. We’re out here trying to win a golf tournament. I would have done it if he said it to Luke, just like Rory did to the guy that said something to me at L.A.

Just because you’re standing behind the ropes doesn’t mean that you can — I don’t care how much I dislike somebody, I’m never going to wish that kind of stuff upon them. I felt it was inappropriate, so he had to go home.”

The next day, though, Thomas took to Twitter to explain further, and apologize:

Getting a lot of comments on the fan incident yesterday.. sorry to any and all offended by it. There was more said as we walked to the tee wishing bad things on the course for myself or Luke. Then the get in the bunker comment over and over again I felt…

…it was very understandable to have him escorted out. I never want to lose fans, or have people root against me. I just didn’t see a place for that particular person to be yelling at us things that weren’t necessary over and over again. I over reacted…

..and should not have had him kicked out. I feel bad for it, but was more doing so because again I felt the stuff he was saying was completely unnecessary. I love all my fans and to hear that I’ve lost quite a few bc of that, isn’t fun. So I’m sorry to all!

…the fans are who support us all on TOUR and we are extremely lucky to have them each and every week. Thanks to all who came out and supported at @TheHondaClassic and continue to every week we play. We (I) love you guys