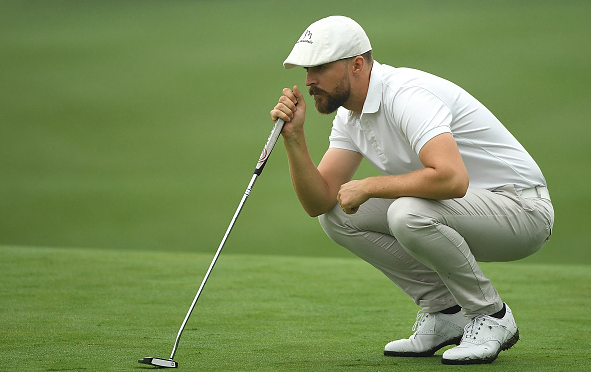 In the first big-ticket tournament of the new PGA Tour season, a relatively small name tops the field.

Rikard Karlberg, a 30-year-old from Sweden who has never even made the cut in a major, got off to a sizzling start in Shanghai, with birdies on 1, 2, 3, and 4 to lead the WGC-HSBC Champions after the first round.

A hiccup on 18 (a bogey on the par-5) was the only blemish on his scorecard as he finished with an eight-under par 64.

Immensely popular American Rickie Fowler is one stroke behind Karlberg, while Hideki Matsuyama, and defending champion Russell Knox are two back. The event in Karlberg’s first career WGC appearance.

Karlberg started hot, with the aforementioned four consecutive birdies to start his round, and then stayed hot, shooting birdie on nine of 18 holes, the second most in the field (Hideki Matsuyama had 10 birdies, with four bogeys). Karlberg was dialed in all day, hitting 10 of 14 fairways and 16 of 18 greens.

He is not yet a big name on the PGA Tour, but has had some success on the European Tour, finishing solo-second behind Chris Wood at the BMW PGA Championship, the European Tour’s flagship event, and winning the 2015 Italian Open.

With the Race to Dubai in its last week before its playoffs, Karlberg is putting himself in great position for a late move, as he currently sits in 28th place.

Zhang (-4), Ross Fisher (-3) – Being a China-hosted event, the field for the WGC-HSBC Champions features six Chinese golfers, and one of those, Zhang rode six birdies to a four-under par 68. He is currently in a tie for ninth place.

Zhang, the 449th ranked golfer in the world, has won twice on the PGA Tour China Series, and while he does not have a win in the current season, he does have two runner-up finishes. Fisher contended at the 2009 U.S. Open, finishing fifth and playing in the last pairing on Sunday, but has made little noise worldwide since.

Dustin Johnson (+2), Danny Willett (+2), Patrick Reed (+6) – U.S. Open Champion Dustin Johnson, fresh off being named the PGA Tour Player of the Year, struggled in his first round since winning the honor, uncharacteristically carding only one birdie in his round, which was more than cancelled out by a bogey on 9 and a double bogey on 16.

DJ was long, per usual, but was not accurate, hitting only 7 of 14 fairways. Masters Champion Danny Willett currently leads the European Tour’s Race to Dubai, but did not show much of that form in round 1.

Willett got off a cataclysmic start going 5-over-par on a four-hole stretch from his third to sixth of the day. Willett settled down after that and finished the day at +2, but the damage may already be done. Reed’s terrible round (+6) may have been the shocker of the day. The last time we saw Reed, he was leading the Americans to a Ryder Cup triumph. That Patrick Reed was nowhere to be found in round one.

England’s Paul Casey is not doing much wrong with his game as of late, and today was no exception. Four birdies and an eagle led the way to a five-under 67, good for a share of sixth place.

Casey has finished in the top four of his past five events, with three of those, a runner up finish at both the Deutsche Bank Classic and the BMW Championship and a solo-fourth finish at the Tour Championship, occurring in events with elite fields. Casey hit 15 of 18 greens and had just a single bogey on the day.

“I think it’s my fourth event this year. Three events I’ve played this year; it’s my fourth total. It’s been good. I kind of finished Top-10 in the Shenzhen International, and then 20-something in Volvo China Open there in Beijing.

So absolutely, it’s a little bit same kind of condition as we play in Shenzhen, soft, and you just have to be aggressive all around. But I think mostly come from the time that we are playing on The Asian Tour, which I learned a lot from, how to stay aggressive and how to read the greens.”
-First Round Leader Rikard Karlberg, on his experience playing in China.