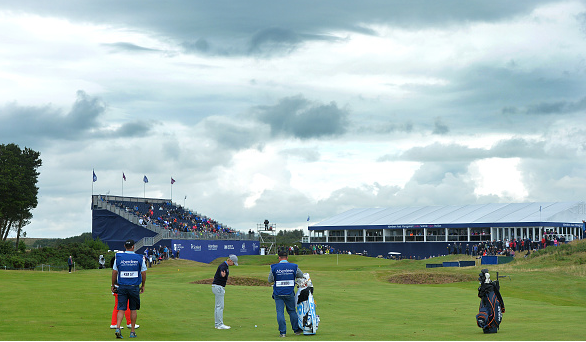 Karrie Webb was pretty much the wire to wire leader at the Ladies Scottish Open this week. Right up until the final three holes, that is.

Webb was at 7-under, and one up with three holes to play, but a double bogey on 16, followed by a bogey on 17 dropped her from the lead, and two back of eventual winner Mi Hyang Lee, who was in the clubhouse at 6-under.

A birdie on 18 wasn’t enough to make up for the two-hole meltdown, as the Aussie finished one shot back at 5-under.

Afterwards, a frustrated Webb didn’t realize she needed an eagle to get into a playoff, and blamed the confusion on the lack of scoreboards set up at Dundonald.

“I just had an in-between number unfortunately. I would have liked to have just hit a hard 8-iron but I couldn’t count on it carrying that front. But no leaderboard on the last, so I didn’t know I had to make that,” said Webb.

When asked to clarify the scoreboard comment, Webb continued, “Well, there was no leaderboard. So I don’t know how anyone would know. I just assumed when I made my putt that it wasn’t a huge cheer, so I assumed it wasn’t to tie. So yeah, it’s pretty bad to not have a leaderboard on the last. WELL, that’s the first time I’ve ever been — that hasn’t had a leaderboard on 18.”

Monday Stocks: Who’s Up, Who’s Down