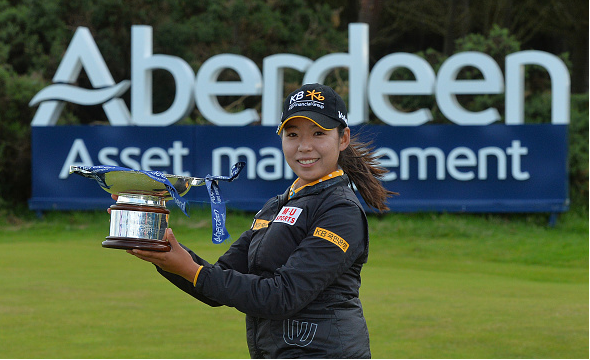 Mi Hyang Lee shot a 6-under 66 on Sunday to cap off an epic weekend comeback at Dundonald Links, and win the Ladies Scottish Open.

After two rounds of 73 and 75, the 24-year old Lee was 4-over, and nine off the lead heading into the weekend. But after posting the two low scores of the weekend rounds (68 and 66), she finished at 6-under, and as a champion.

“I think the first and second round was, I hit it really good, but just I missed a lot of putts. So I tried to practice my putting with the wind. I made a lot of putts yesterday, so I took a lot of confidence from yesterday,” said Lee, who captured her second career LPGA win.

Karrie Webb, the leader for much of the tournament, made eagle on 14 to gain sole possession of the lead again at 7-under, and held a one-stroke advantage with three to play.

But the veteran Webb made a mess of 16 (double bogey) and 17 (bogey) to drop two behind Lee, who was in the clubhouse at 6-under.

A birdie on 18 wasn’t enough to make up for the two-hole meltdown, as the Aussie finished one shot back at 5-under, alongside Lee Mi Jung Hur.

Afterwards, a frustrated Webb didn’t realize she needed an eagle to get into a playoff, and blamed the confusion on the lack of scoreboards set up at Dundonald.

“I just had an in-between number unfortunately. I would have liked to have just hit a hard 8-iron but I couldn’t count on it carrying that front. But no leaderboard on the last, so I didn’t know I had to make that,” said Webb.

When asked to clarify the scoreboard comment, Webb continued, “Well, there was no leaderboard. So I don’t know how anyone would know. I just assumed when I made my putt that it wasn’t a huge cheer, so I assumed it wasn’t to tie. So yeah, it’s pretty bad to not have a leaderboard on the last. WELL, that’s the first time I’ve ever been — that hasn’t had a leaderboard on 18.”

Rounding out the top 5 were Spain’s Carlota Ciganda (70) and 36-hole leader Cristie Kerr (72), who finished tied for fourth at 4-under.

“I didn’t believe I got a win today. So it was a really surprise for me, and then just my front nine is amazing, and then I think I got a good start from my first hole. Then just my back nine is a little up-and-down, but I made a lot of putts. I made a lot of good putts and then a good chip shot, too. Just I think hole-by-hole, simple. Just try to think of the simple, yeah.”
–Mi Hyang Lee, 2017 Ladies Scottish Open champion

Monday Stocks: Who’s Up, Who’s Down