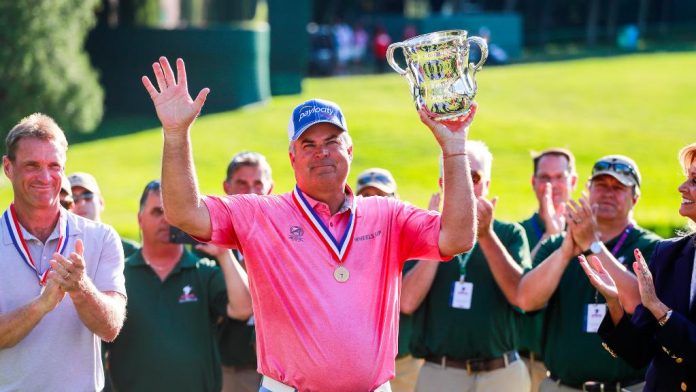 Perry, who started the day one back of leader Kirk Triplett, played a bogey free final round, with two birdies and 16 pars, to finish at 16-under par.

The 56-year-old Perry made one of his two birdies on the very first hole to tie Triplett at 15-under. And after a bogey by Triplett on the 150-yard par-3 third hole, Perry took sole possession of the lead, and never looked back.

At the turn, Perry’s lead ballooned to four, after back-to-back bogeys by Triplett on 8 and 9. But Triplett righted the ship with birdies on 14 and 16 to put some pressure on Perry down the stretch.

“But it was still nervy all the way to the end because when I putted my first putt on 18 up there, I still had a 3-footer down the hill slicing,” said Perry, who now owns four senior major titles. “I knew, if he made his putt, I was going to have to make that putt to win. So I was thinking, boy, oh, boy, this could get interesting.”

Triplett finished his final round at 1-over 73, and 14-under for the tournament.

Brandt Jobe followed up his record-tying 62 on Saturday with an even-par 70 to finish solo-third, seven strokes back, at 9-under. Fred Couples and Tom Lehman finished with matching 69s to tie for fourth at 8-under.

As the USGA’s senior champion, Perry gets an automatic invite to next year’s U.S. Open at Shinnecock Hills.

“Unreal, to tell you the truth. It’s our goal to always win our championship, and I never could get it done on the regular Tour. It’s such an honor for me to represent this Tour, and this is our Open. To me, this and the senior PGA are the two exclusive tournaments on the Champions Tour. To be a two-time champion, the USGA did just a tremendous job this week with the golf course.”
–Kenny Perry