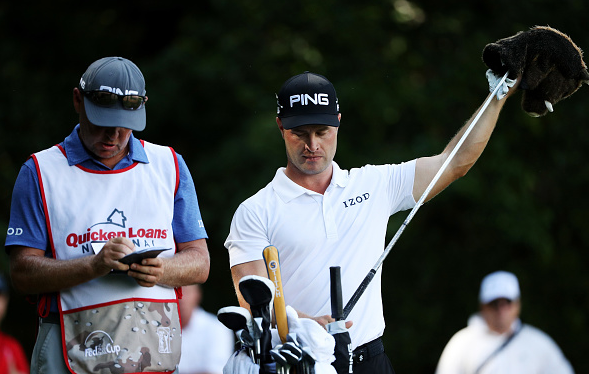 David Lingmerth struggled to a 3-over 73 on Saturday at TPC Potomac but will still take a lead into Sunday’s final round at the Quicken Loans National.

Lingmerth bogeyed the 1st and 17th, and in between wasn’t much better with two birdies bookending a bogey and a double.

“I shot 73, I’m still right where I need to be for tomorrow, and I’m not to worried about the way I played today. I think I can come back tomorrow better,” said Lingmerth, who will be seeking his second career PGA Tour win on Sunday.

The 29-year-old Swede sits at 7-under, one shot up on Daniel Summerhays, who is at 6-under, following an even-par 70, which included one bogey, one birdie and 16 pars.

Spencer Levin posted the day’s lowest round, a 5-under 65, and skyrocketed from T23 to solo third. It was Levin’s best round in nearly two years.

“It’s been a tough year but the putts have been going in this week, which is obviously why I’m playing well,” said Levin, who is at No. 176 in the FedEx Cup standings. “That’s what it’s going to take tomorrow. I’m looking forward to it, though. I haven’t been in this position for a long time.”

Rickie Fowler, one of the few marquee names in the field, finished at 2-under on Saturday, and moved 19 spots up the leaderboard to T18, but still seven shots back.

“Yeah, it’s a situation that I haven’t previously been in, honestly. I haven’t had the wire-to-wire scenario in my career, but a lot of great players have won tournaments that way and I would like to do it as well. I’m kind of feeling like I’m up for the challenge. I think it’s a great opportunity to maybe be able to pull that off.”
–David Lingmerth, on what it would mean to win wire-to-wire.