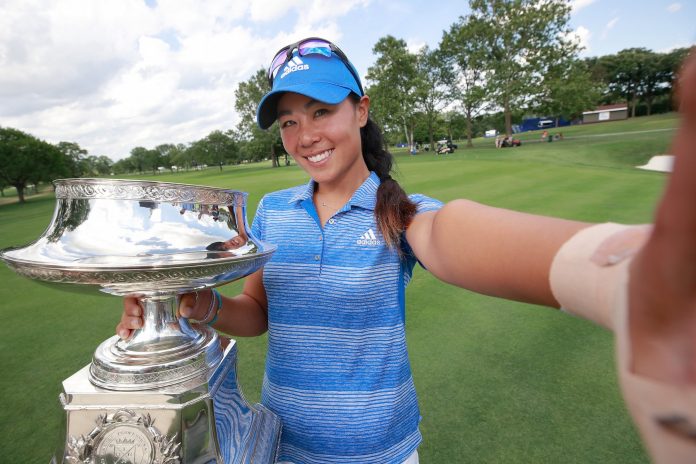 On Saturday, Danielle Kang birdied the 18th hole at Olympia Fields to take a share of the 54-hole lead at the KPMG Women’s PGA Championship. And on Sunday she did it again. This time to capture the major title, and her first career LPGA Tour win.

Kang, a two-time U.S. Women’s Amateur Champion, finished at 13-under par, one better than defending champion Brooke Henderson (66), who made a Sunday charge to finish at 12-under par.

Henderson, who was playing one group ahead of Kang, made three birdies over the first seven holes to take a share of the lead at 10-under par.

A Kang bogey on the par-4 10th hole dropped her to 9-under, and out of the lead. But the former Pepperdine star came roaring back with four straight birdies to take the outright lead at 13-under, three shots up on Henderson.

“The three-putt on No. 10 was the turning point for me,” Kang said in a press conference. “I said I’m going to learn from that and then I made four birdies in a row.”

After a bogey on 17, coupled with a Henderson birdie on 18, Kang teed off on the final hole all tied up with Henderson at 12-under par.

Kang played the 18th on Sunday at Olympia Fields like she did on Saturday, text book perfect. She reached the green in two, and two-putted. But this time for the win.

“That was the hardest two-footer I’ve ever had to putt. I had to tell myself, “Danielle, you don’t miss 2-footers, so just putt it.” It was pretty nerve-wracking, but I just did it,” Kang said, describing the final putt.

Chella Choi, the co-leader with Kang after 54 holes, shot an even-par final round to finish at 10-under, good for solo third.

“Having a major championship in my resume, I don’t know what it will do. But I do know that having the U.S. Amateur as majors, and having a major win, it’s amazing.”
–Danielle Kang