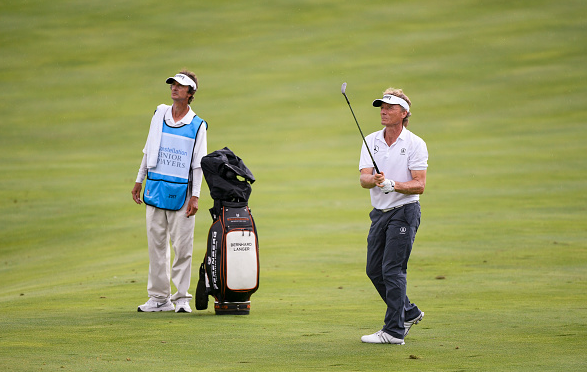 Bernhard Langer posted a 5-under-par 67 during a rain-delayed second round at Caves Valley Golf Club to take the 36-hole lead at the Constellation Senior PLAYERS Championship.

During the second round, which finished Saturday morning, the 59-year-old Langer bogeyed the first and 18th, but in between birdied seven others and sits at 12-under for the tournament.

One back of the German Tornado is Corey Pavin, who is at 11-under after two sweltering rounds in Maryland. Pavin was at 13-under, and in sole possession of the lead, until he bogeyed two of the final three holes to drop two strokes.

Brandt Jobe, one of the hottest players on the senior circuit of late, is at 10-under, and alone in third after a second-round 68. Scott McCarron also posted a 68, highlighted by a five-birdie front-nine, which included three in a row (4-6). McCarron is alone in fourth at 9-under-par.

Opening-round leader Larry Mize shot a 76, 12 shots off his opening-round 64, and plummeted down the board to a tie for 15th.

U.S. Senior Open champion Kenny Perry posted a 2-under 70 and is tied with fan favorite John Daly (73), among others, at 1-under.

Today is Arnold Palmer Appreciation Day at the @seniorplayers.

“Yeah, I’m in a good position so look forward to the weekend. Think we’re done with the rain. Just have to cope with the sauna out here.”
–Bernhard Langer, Senior PLAYERS Championship, Round Two Leader