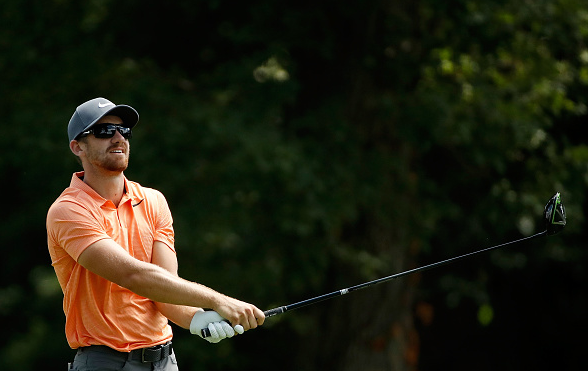 Patrick Rodgers fired a second-round 7-under 64 at TPC Deere Run and leads the John Deere Classic at the halfway point.

The 25-year-old Rodgers is at 13-under-par after a day which included 8 birdies and just one bogey.

“It was tricky this afternoon with some breeze, but I know 13-under is not going to win the golf tournament, so I got to keep that same mindset for the next two rounds,” said Rodgers.

Chesson Hadley, the 2014 PGA Tour Rookie of he year, who won last week’s Web.com LECOM Health Challenge and secured his 2018 Tour card, posted a bogey-free round of 64 to get to 9-under, tied for fifth.

Kevin Kisner is at 8-under-par, following a bogey-free 65. The recent winner of the DEAN & DELUCA is tied for ninth with Nicholas Lindheim (66).

The field’s top ranked player, Daniel Berger (No. 20), posted a 67 and is at 6-under-par. First round co-leader Ollie Schniederjans struggled to a 74 and sits at 5-under. Bubba Watson and Davis Love III are both at 3-under-par.

Defending champion Ryan Moore shot even-par 71 and missed the cut at 3-over.

“Yeah, I love coming to this tournament, first of all. It’s probably the most special stop on tour for me. It’s crazy. It’s already my sixth time playing here, so a lot of good feelings all week. Very comfortable in the area and on the golf course.”
–Patrick Rodgers, John Deere Classic leader after two rounds