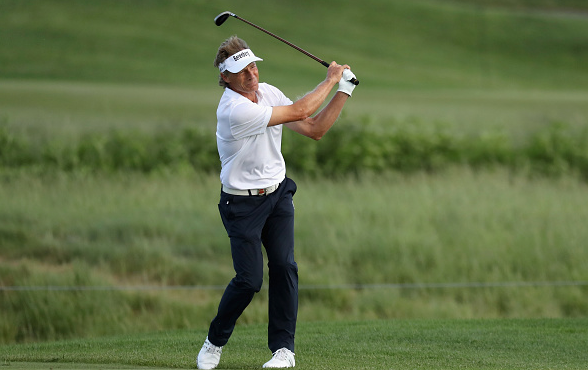 Bernhard Langer maintained the lead in a weather-delayed round two of the Senior PGA Championship at Trump National. Langer shot a 5-under 67 on day two (which finished up on Saturday morning) and is at 12-under-par.

Who else? Miguel Angel Jimenez!

Miguel Angel Jimenez is 6-under, four back of Singh #SrPGA pic.twitter.com/EJIJqPX3uX

“I finished seven holes in the morning and the wind was just getting up. So I was kind of getting used to the conditions. And then when you finish it was blowing quite nicely, too. But it was tough, it was really tough putting. I think 8, 9, 10, those stretch of holes where the wind comes straight off the river was really blowing hard. You can very easily miss short putts. But I played well, I putted really nicely today, I saved some nice pars that kept me going. It’s blowing, you just have to manage your game well and just make sure you don’t get out of position. If you get out of position, then you have to scramble and I didn’t do too many of that.”
–Vijay Singh, on the windy conditions

That's not supposed to be there! pic.twitter.com/z21f9ctfsv