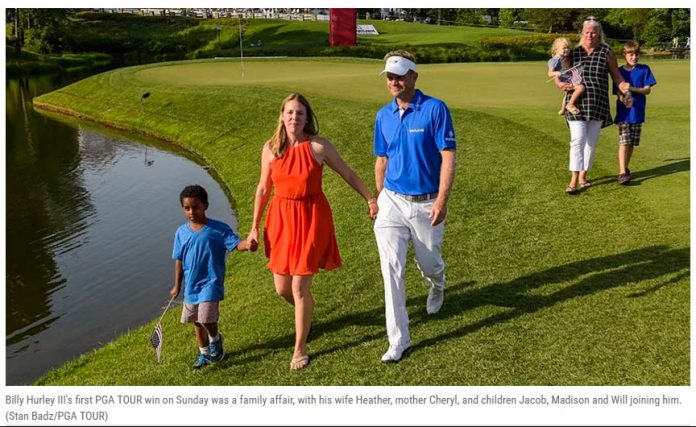 “Billy Hurley III barely celebrated after his final par putt fell into the 18th hole to win the Quicken Loans National at Congressional Country Club on Sunday. Perhaps, if he had let himself go, he had no idea what he would do. Few men have won a golf tournament — or any sports event — that wove together more powerful personal emotions, more conquering of self-doubt and more vindication of a still-grieving family. He did nothing because he felt so much. He kept his dignity and poise because, as in his whole life, as an officer, gentleman and golfer, those are the qualities he has chosen as his running lights,” writes Thomas Boswell of the Washington Post.

“His $1,242,000 win vaulted Hurley from the fringes of the sport, a fellow stuck at No. 607 in the world with half of his career spent in golf’s minor leagues, to the secure status of a tournament champion,” Boswell continues. “Now, after playing the minor league Web.com Tour in three of his six years as a pro, he will be exempt on the PGA Tour through the 2018 season.”

“With his victory, Hurley now has berths in the WGC-Bridgestone Invitational, Open Championship and PGA Championship. He’ll play the FedEx Cup Playoffs that he missed out on a year ago, and he’ll take a trip to Hawaii in January for the winners-only event at Kapalua,” Will Gray of the Golf Channel writes.

“One year ago, Hurley stood before his PGA Tour brethren a broken man. He was looking for answers amid a situation where solace and comfort were hard to come by,” adds Gray. “But this week, despite all of the pain and turmoil of the previous 12 months, Hurley walked off the final green a champion. He had reached the pinnacle of his career, and he had done so at the tournament which, for him, perhaps means the most.”

“Hurley said he often thought of his father during the tournament, especially when seeing law enforcement escorting him and others inside the ropes,” writes USA Today’s Steve DiMeglio.

“When the final putt fell, Els, his playing partner, gave him a hug. Then his wife Heather, their three children and his mother joined him in celebratory hugs, all awash with tears,” John Strege of Golf Digest writes. “It is a given that the tournament that follows a major championship is a letdown, but not this time, not in this one, played in the shadow of the nation’s capitol, with a Navy man, a war veteran, improbably prevailing.”

Excerpts is a Pro Golf Weekly feature where we weave together excerpts from some of golf’s best writers to tell an even more compelling story.