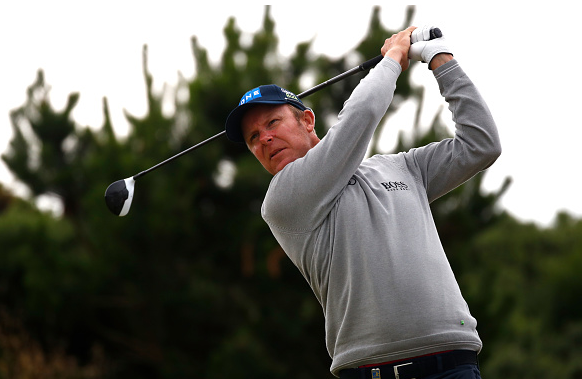 Finland’s Mikko Ilonen is the surprise leader of the Scottish Open after posting an opening-round 7-under 65 at Dundonald Links.

The 37-year-old Finn, who has missed the cut in his last four starts, got off to a hot start with five birdies over the first six holes. He added two more on the back-nine to finish with his best the round of the season.

“65 is the round of the season, really. I’m not going to say it’s been the whole season pretty bad but it’s been certainly a good part of it has been pretty slow out there,” said Ilonen. “It’s nice to get something going and make a few birdies and no mistakes on the card.”

The only other time that Ilonen has held the solo-lead after 18 holes was in 2014 at the Irish Open where he went wire to wire for the win.

Rickie Fowler, Padraig Harrington and Ian Poulter are among a group of players at 5-under 67, two strokes behind the leader.

Fowler, who posted a bogey-free round, felt he managed his game well on the links-style course.

“It felt good, but it’s fun to go out on links and for me to hit shots and don’t necessarily have to be spot on,” said Fowler. “It’s kind of about managing the game and hitting shots and working your way around the golf course and putting yourself in the right position and avoiding bunkers. I felt like I did a good job.”

Matt Kuchar leads a group of five players at 4-under 68, while Adam Scott headlines a logjam of players at 3-under-par.

Alex Noren is among a group at 2-under, alongside Rafael Cabrera Bello, Andrew Sullivan, and Luke Donald.

World No. 4 Rory McIlroy bogeyed his final hole to finish at 2-over par 74, and refused to speak to the media afterwards.

The 28-year-old superstar faces an uphill battle to avoid his third missed-cut in four starts.

Former British Open champion Darren Clarke embarrassed himself with an 8-over 80.

Ilonen's lowest ever score at the #AAMSO in 35 career rounds. pic.twitter.com/5RJngBqoWB

Harrington with the chip-in for… par!

“I actually changed my irons on Tuesday. So new irons in the bag, 718s. It can be just little things that gives you a little extra confidence. I didn’t really miss one shot — well, one tee shot I missed on the eighth, but other than that, I struck the ball better than probably two or three years.”
–Mikko Ilonen, Scottish Open, Round One Leader