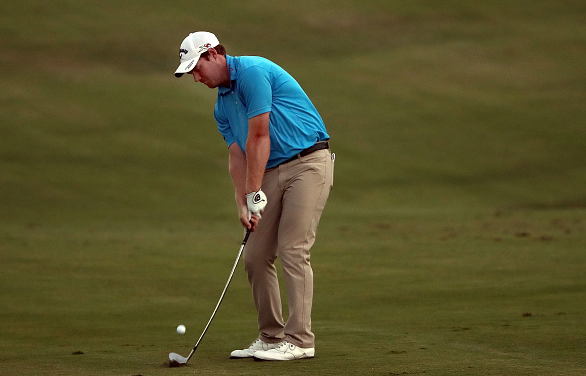 Grayson Murray fired a 7-under 65 during round two of the Sanderson Farms Championship and heads into the weekend with a two-stroke lead over Greg Owen and Seamus Power, who are tied for the second spot at 10-under.

The Tour rookie was consistently solid throughout his round, making 8 birdies to go along with 9 pars. The only real trouble for the former Arizona State star came on the par-3 10th hole where he bogeyed it for the second consecutive day.

A logjam of four players are tied for 4th at 9-under, including Grahame DeLaet and former U.S. Open winner Lucas Glover.

As mentioned yesterday, the key to scoring well at the CC of Jackson is accuracy. Murray has been consistently accurate off the tee through two rounds, hitting nearly 70% of his fairways, good for T3. And he’s been just as accurate going after the greens, hitting almost 80% of them, placing him inside the Top 20 in the field.
Driving Accuracy: 67.8% (19/28) – T3
Greens In Regulation: 77.78% (28/36) – T16

Cody Gribble, who we picked as a sleep/power pick, and then criticized him yesterday, bounced back big today. The Tour rookie fired a 9-under 63 and is now within four shots.

Texas alum Cody Gribble is in with a sizzling 63. ? https://t.co/USGopPbSED

Old friend David Duval with a long bomb for birdie on the 7th hole.

“I was striking it a lot better than my first tournament. I don’t know if I can just — I think I see these holes very well. They set up to my eye, unlike Safeway I had to go over a lot of trees off the tees. This one just kind of lets me unleash my driver, and that’s really my best club in the bag right now. So as much time as I can put that in my hand, that’s what I’m going to do.”
–Grayson Murray, Round 2 Leader.